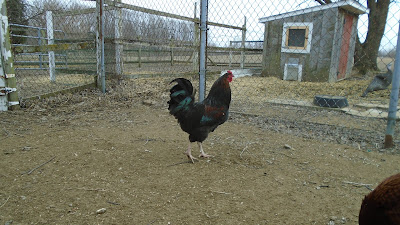 It's official. Zippy isn't a hen. I realized this last October...and yes in the spirit of catching up the blog here on all things groovy and what's been going down....I thought I'd just start where I left off.

Zippy is a full grown adult male rooster! He's beautiful...and yet...there's much ruckus in the barnyard on a daily basis because Black-beard (his daddy) is the boss of the town.  Roosters as a rule don't get along...per the competition of course.  But fortunately Zippy is fast and is a runner! This will fare well for Zippy living...Black-beard killed the last rooster we had.

After my disappointment of my one-and-only hatched egg from my incubator turning out to be a male...I decided...maybe...if something happens to Black-beard...that Zippy will be a good replacement.  So I guess he's become the backup rooster. The plan B.

After all...we live in the middle of wild kingdom...and thus far Black-beard has proved to be a great "watch-dog" for the hens when it comes to predators.  I'm hoping that Zippy will learn this trait of "watch-dogging" and might could be a solid stand in were Black-beard to die for one-reason-or-another.