While standing near Ashland Rail Yard in Chicago, IL this train was rolling by and the humor of what was spray painted on the center (red K LINEs)  railcar made me laugh out loud.

Look closely at the yellow part under the red containers. 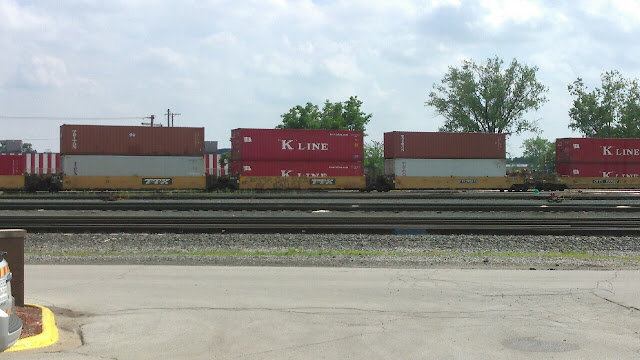 Posted by Rachel Dickson at 11:51 AM No comments: 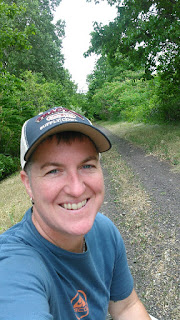 I don't hike alone much these days because I almost always have my trail buddies along with.

It's so difficult for me to stay indoors during the summer...and the dogs feel the same way mostly.

Here we are enjoying a local trail. Reese is the one in the lead here...Dodi close behind. 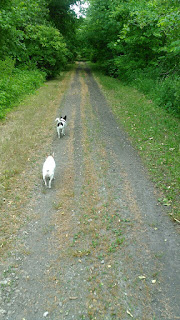 Things I can say about Ohio trails is never a poisonous snake, never a black bear...maybe the occasional squirrel or ground hog....but no less number of ticks than in Tennessee. (I keep meaning to get the dogs t-shirts that say "tick-magnets" on them.)

Oh and this is a section of the Wabash-Cannonball Rail-to-trail North Fork.


Posted by Rachel Dickson at 11:46 AM No comments: 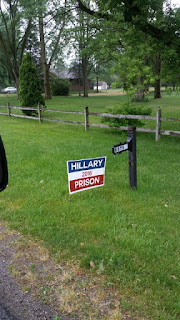 While driving home one day....Chris noticed this sign in someone's yard.  She told me about it and sometime shortly thereafter we took this photo.

Gotta love some Fulton County Ohio!
Posted by Rachel Dickson at 11:36 AM No comments: 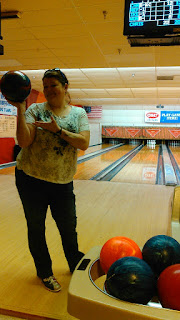 We're making every effort to do things this summer that are fun, not real pricey, fairly easy to do and close by.

This was actually Isaac's idea...bowling....as it's so hard for me to stay indoors when the weather is fab fabness outside.  But we went anyway.

Isaac (Chris' 13 yr old) grabbed a friend and off we went one day last week to give-a-go at bowling.  Me, Chris, Isaac and Juan.

After we gathered up all the necessary bowling accouterments (ie, bowling shoes and bowling ball) and after receiving a tutorial on how to set the scoring machine (very uncomplicated in a complicated way), the emotions of trying to roll a heavy ball down a slick, waxed, wooden alley with aluminum gutters on both sides (which I think have magnets in them that suck in bowling balls) while attempting to knock down ten pins...is no where NEAR as easy as it looks.

It took us all some finagling...a little bit of trial-and-error...some luck...and some good ole crap shoot...before we got the hang of it. 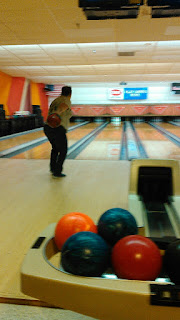 I made an audible explosion sound complete with hand-motions nearly every time Chris bowled because her pins seemed to go careening like they just got hit by a truck.  Made me smile.

Technique is everything in bowling.  And no doubt...100% mental.

Needless to say, we all had a lot of fun.  And will likely try it again sometime soon.

Group activities...definitely something to write home about.
Posted by Rachel Dickson at 11:33 AM No comments:

What wanders into the yard...is anybody's guess 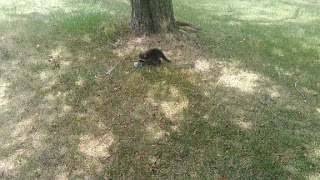 Having grown up in an old farm house with huge windows...it was easy to be drawn to look outside when passing by...mainly because it was anybody's guess as to what you might see.

This farm house I live in now...while not such the large windows...it still amazes me what you can spot...you just never know what you're going to see.

This particular day...two of the cutest baby coonies wandered through.  Yes, yes...I know. I'm fully aware that baby raccoons grow up to be big raccoons and often wreak havoc on a chicken flock...but somehow this was different.  These two looked dehydrated and a little lost.  One was much smaller than the other...and it took some doing to manage to get some food in his belly.

The term "cooned-up" comes to mind...when I approached them both with a can of open tuna...the littlest guys' first response was most likely what mom had taught him...coon up (he turned sideways and arched his back like a cat and poofed his tail) and climb!  Although not so fast...he did manage to climb up into the nearby crab-apple tree.  His climbing skills were amazing...paws like velcro to the tree bark.  I was concerned that he might stuggle to get down...pfffft, silly me. He came down like a champ, just like he went up.  Well taught by mom!!

Anyhow, he did finally manage to sniff his way to the tuna can I left on the ground nearby. I didn't want to try and touch or pick up either of these guys...as my intent was simply to hydrate them a bit, give them some energy with no worries that they'd stick around.  (They seemed very intent upon moving on...like they were looking for something.  Probably mom. She was no where to be found so I'm guessing she had been killed on the road or some such. 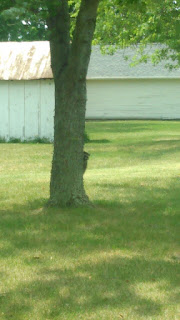 The larger of the two climbed a nearby tree and watched while chattering to his little brother.  I left them both in the backyard...hoping that they would simply move on...which it seems they did.  I never saw them again.

For as often as I've had to shoot adult raccoons messing around in the chicken barn, somehow this little act of kindness made me feel just a tad bit better.  As if the universe sent these two across my path so I could "pay-it-forward" in some way.  No idea if it did any good at all...but at least the little guy got a belly full.

Yet another way that nature shows me...life is truly one moment at a time...if we choose to pay attention.  Never know what might wander through your yard.

And let the wild things remain wild.
Posted by Rachel Dickson at 11:20 AM No comments: