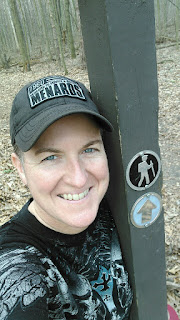 As you can see in this photo below...both dogs are like....pleeeeaaaaseeee can we go home now!  Hah...we still had about 30 minutes of walking after I took this photo. 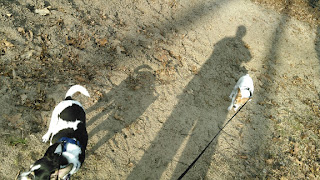 We're back to overcast and meh today...but...my cup is full for now...and is giving me ample opportunity to update things here on the blog.

Cheers!  Until next time...
Posted by Rachel Dickson at 10:56 AM No comments:

I built five new birdhouses last year with the intent to sell them to anyone seeking coolio birdhouses...but just haven't gotten around to photographing and pricing and all that hubb-a-loo.

So last night I decided instead to put three of those new five out in my own backyard birdhouse laboratory and "test" the new designs.

These three houses are yet another do-over from a birdhouse that didn't function (show above... no bird couple claimed it for their nesting purposes last year which I interpretted to mean ...FAIL).  I figured that wild birds probably must not be real keen on having an upstairs and downstairs flat-mate...so I opted to split this one into three parts.

Here's what the birdhouse above became....I like these much better. Let's hope the birds do.


Posted by Rachel Dickson at 10:48 AM No comments: 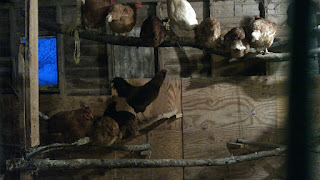 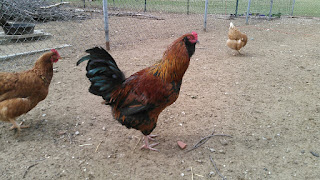 
Posted by Rachel Dickson at 10:31 AM No comments:

glad I'm not a weather forecaster... 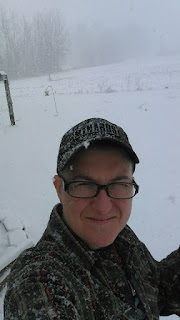 Hmmm, well...seems as if they've missed the last couple. I'm sure it's not easy calculating a guess as to what the weather may do from day-to-day....but the last couple guesses were big forecasting fails.

First it was that we were gonna get hammered with snow last weekend...when PA and NY got hammered instead and today the guess was freezing rain....with a wintry mix.  Pfffft. Today?  Let's just say SNOW.  About an inch and a half fell in about as much time...an hour and a half.  (which in the big scheme of real snow as in Ohio snow...one and a half inches ain't nothing...but still)

Regardless...it's forecasted to warm above freezing throughout the day...so...with any luck...this will all melt off and we'll be back at our normal driving speeds before we know it.

We all knew that mother nature wasn't through with wintry curve balls...so goes the weather.  Glad I haven't taken those concrete blocks out of the back of my truck just yet...
Posted by Rachel Dickson at 11:00 AM No comments:


As I spoke of on my website homepage...I wasn't really thrilled to have the Starlings pick one of my earliest birdhouse creations as home to raise their offspring last year.  So...I'd been pondering on capping the entry to make it smaller...therefore averting the ability for Starlings to enter...and hopefully bluebirds might claim it this season.

Apparently (based simply upon my observations) songbirds return each year to the same place to raise the next seasons young. Who knew?  This does make sense to me since it has to be HARD enough to be a wild feathered flyer trying to raise some of the most fragile little things to adulthood...so why not tweak the deck in your favor and if you were successful the year before...repeat the same exact thing.  Go back to the same nesting spot from the previous year.  Duh.

Well, I capped the house.  (note also that I removed the branch perch...perches seem to allow for other birds to attack into birdhouses that aren't theirs)

Then the Starlings returned.  I spotted them in a nearby tree and on the roof of this house seemingly a little distressed.  Spotted the same Starlings in a Mexican standoff of sorts with the newly returned Bluebirds.  Each perched opposite one another on one of three birdhouses nearby that are within 6 feet of each other.

None of the entry holes of any of these houses are big enough either for the Starling (designed this way on purpose of course...now that I know this is a pertinent detail to attraction specific songbirds to nest)...although they did try to enter a few with no success.

I haven't seen the Starlings lurking around since all this played out a few weeks ago...but the Bluebirds have been back a few times as if to monitor and secure claim to their nesting spots from last year.

I'm not sure if another bird species will try to nest in my newly adapted birdhouse, since Starlings are known to not be nice to other birds.  Will other birds stay clear of this house because they remember who nested in this last year?  Not sure...but time will tell.  Spring is upon us.
Posted by Rachel Dickson at 10:42 AM No comments: 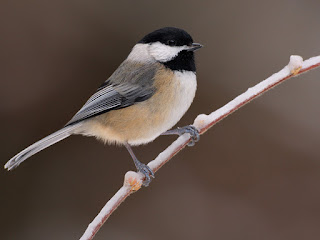 
Since February other songbirds that have returned or that's I've spotted around our backyard feeders or in our general area since February are:

Welcome back feathered friends!!!!
And now to watch the nesting boxes and see who claims which ones.


Posted by Rachel Dickson at 10:03 AM No comments: