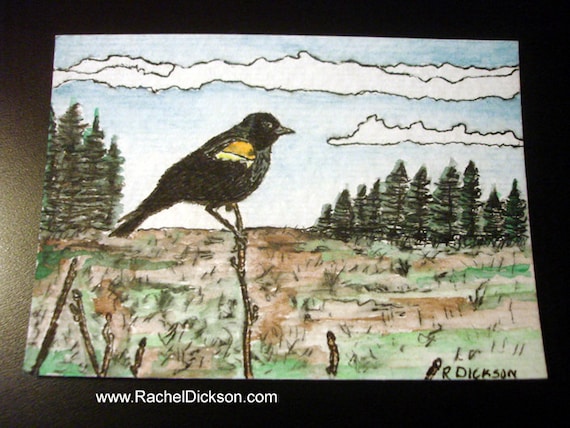 I've have had a fascination for pen and ink and watercolor mixed media art for a LONG time. And it finally dawned on me...duh...why don't you try this for yourself?

Viola!!  Here's one of four new pieces I've created. This one of a red-winged blackbird (welcome back to Northwest Ohio chatty birds now that it's Spring).

We started seeing the red-winged blackbird flitting about around here a few weeks back. There song is a pleasant reminder that warmer temps are finally here!

I uploaded a new audio blog post yesterday about red-winged blackbird complete with audio clip of his song. You can check that out here.

I will soon be posting some information about what ACEO's are and how they originated and such. (This little blackbird piece is an ACEO (2.5x3.5 inches).  ACEO stands for Art Card Editions and Originals.

Drawing has become such a fun practice for me...but now watercolor is a whole other ball of wax. Kudos to all you artists out there who master this medium. To me...not so easy...but I'm learning.

Onward and upward for the arts!
Posted by Rachel Dickson at 8:19 AM No comments:

when the wild version of match dot com fails... 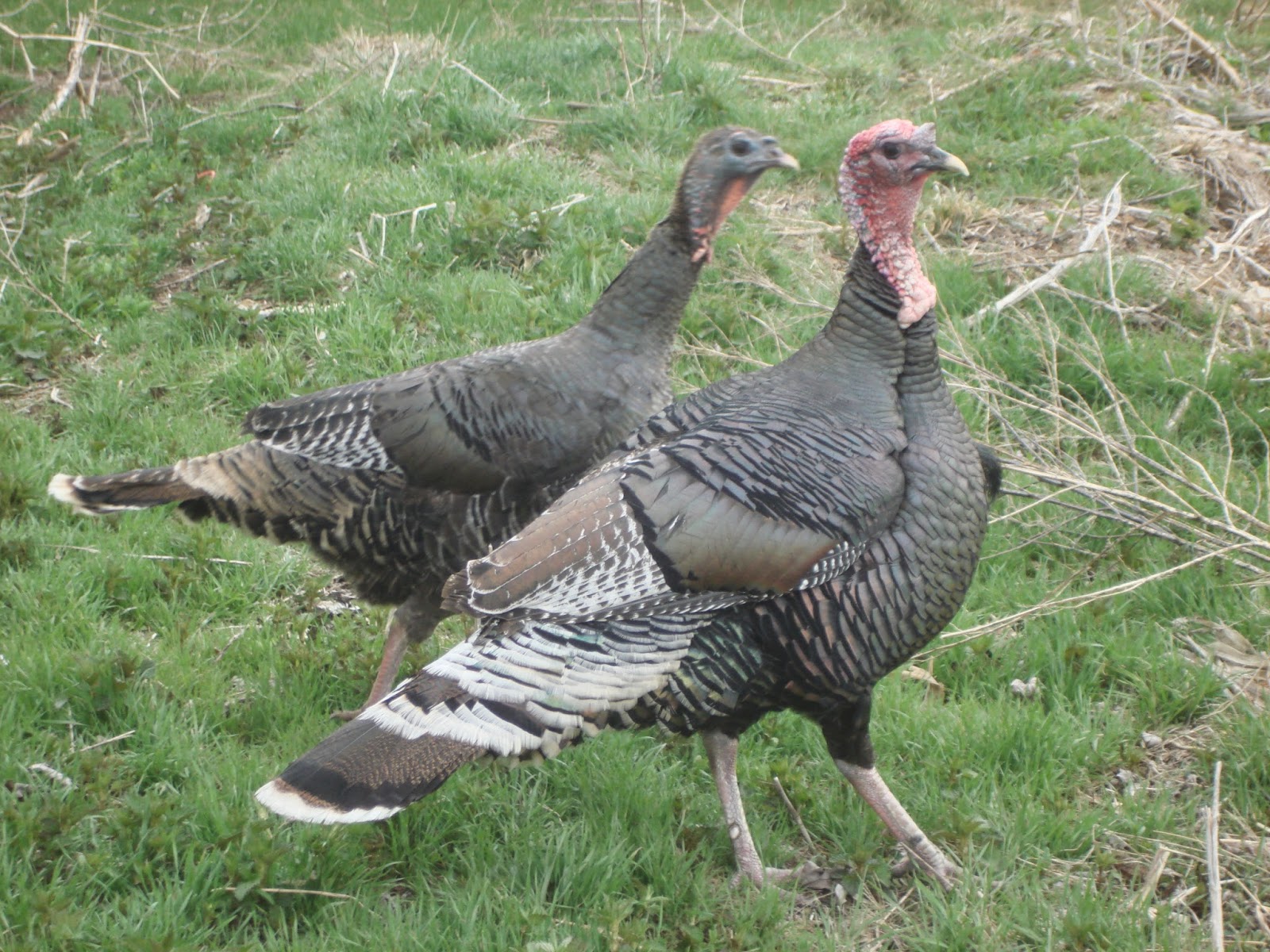 This is our lovely turkey couple. Only "Tom" here has a name (the bigger of the two in the forefront of this photo). We simply call them...turkey hen and turkey tom. We've had them for about a year now...and are hoping to maybe have some turkey pullets sometime in the near future. They hang out quite calmly with the chickens.

Yet, we have a couple of "flocks" of wild turkeys that have been circulating the neighborhood for about the same amount of time. In fact, the last tom turkey we had (about a year and a half ago) went missing and we suspect it was because he joined one of the local wild groups of birds.

Well, a strange thing happened this past week.  First of all, our Tom has been doing nothing but poof and twirl for his girl since the first melting off of snow. He spends most of his days all poofed out in all his glory showing off for his girl.  I'd say she seems meh...maybe slightly interested. But this week...out of the clear blue...this happens... low and behold...a dance-a-thon-of-sorts begins between a wild turkey tom and our tom. Wild tom shows up outta the blue and proceeds to challenge our guy nearly every day...yet ironically through the fence.  Quite the show I might add..  Lots of poofin and pecking through the fence and dancing around. 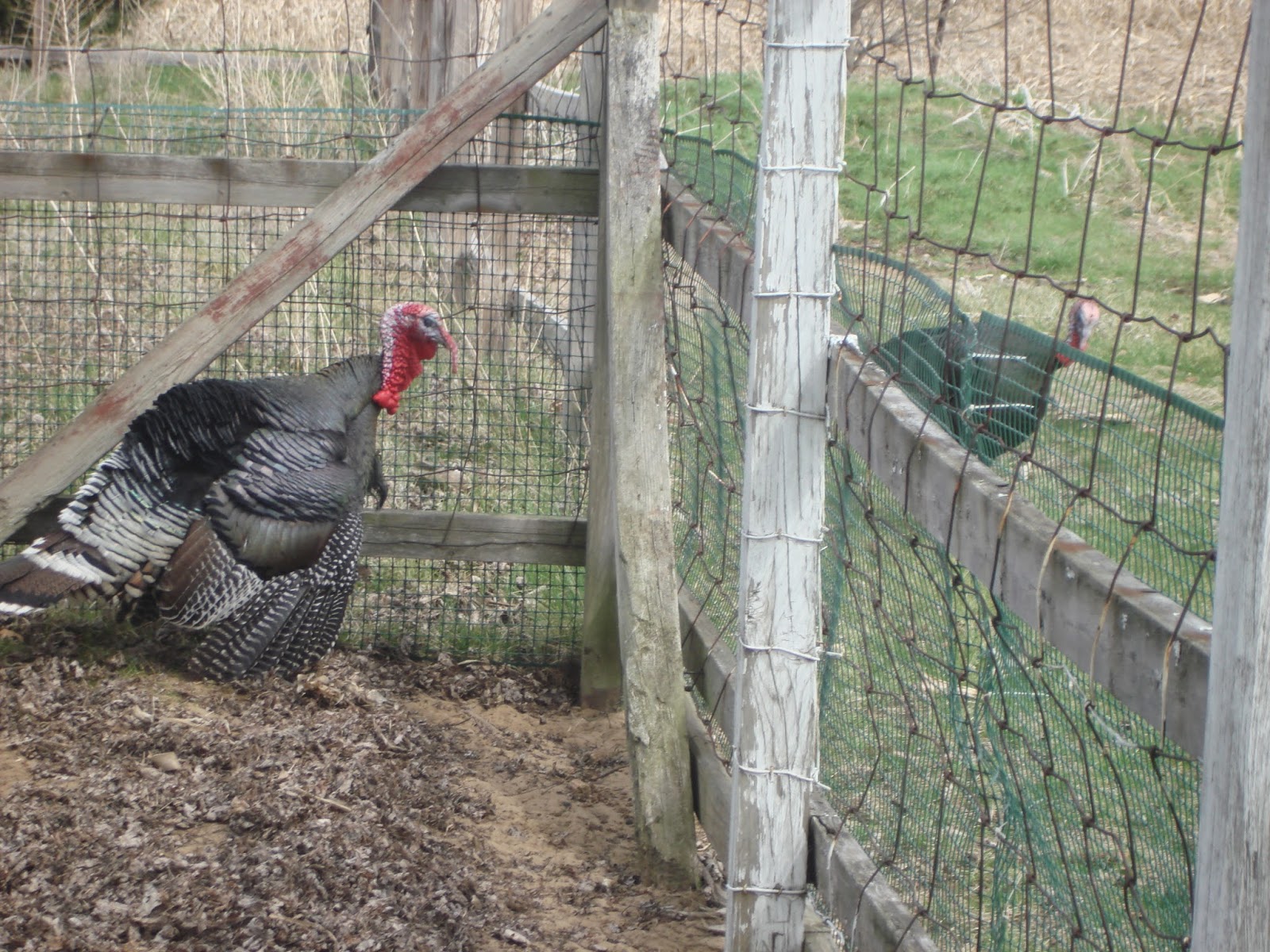 Miss thang looking on all sort of like "yeah...work for it boys" in the background.
Until I start to realize...what's gonna happen here? Blood will be shed over this unless there's an intervention. 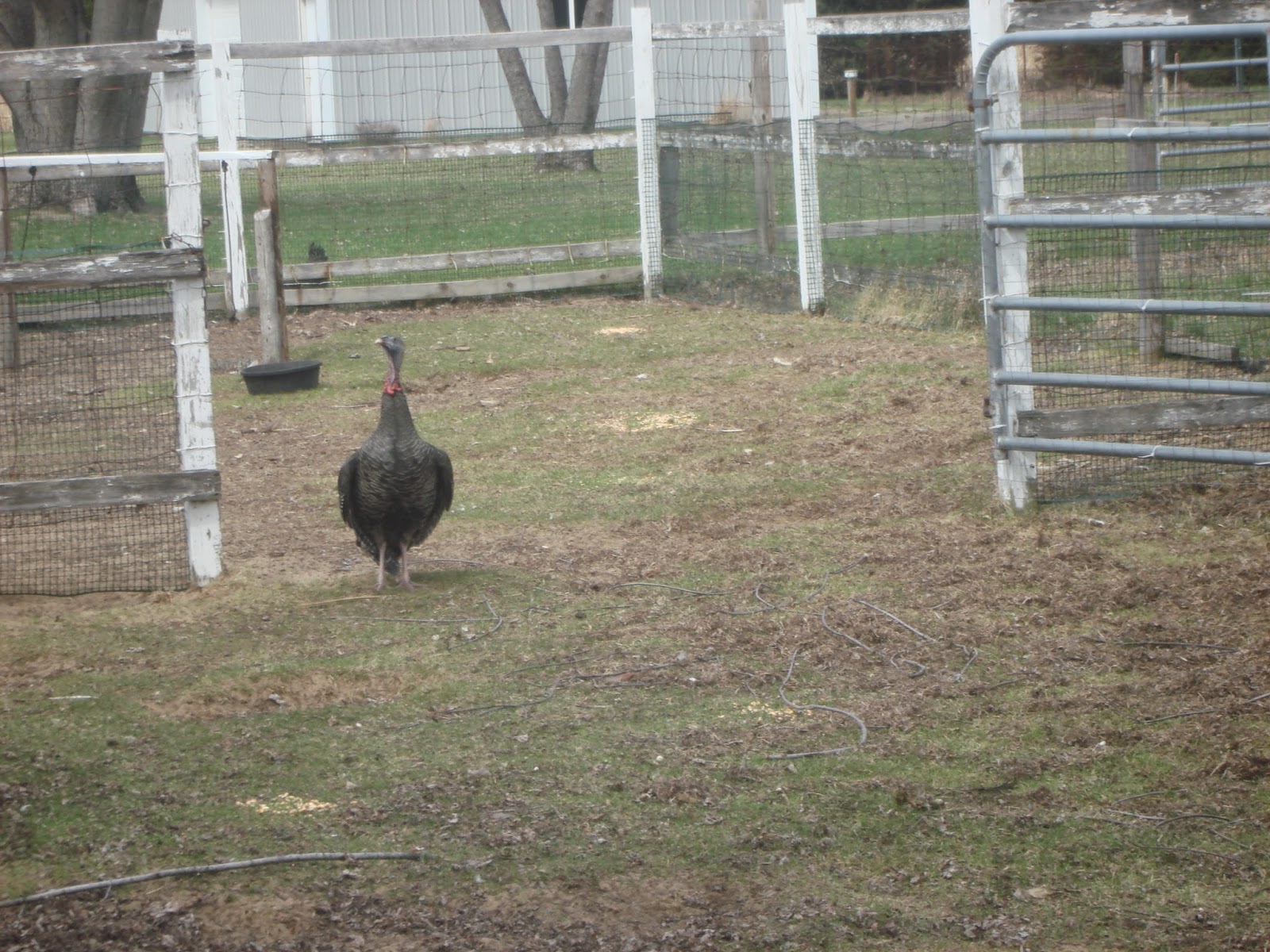 And over the past few days, we've been letting the chickens out to roam the yard and peck at bugs and grass and such...which naturally means the turkeys also are free to run the yard....until....Chris says to me one afternoon this week...

"Um, there are turkeys fighting in our yard!"

Eeek!  I hop up and look out the window. Sure enough...both toms are going at it face-to-face. 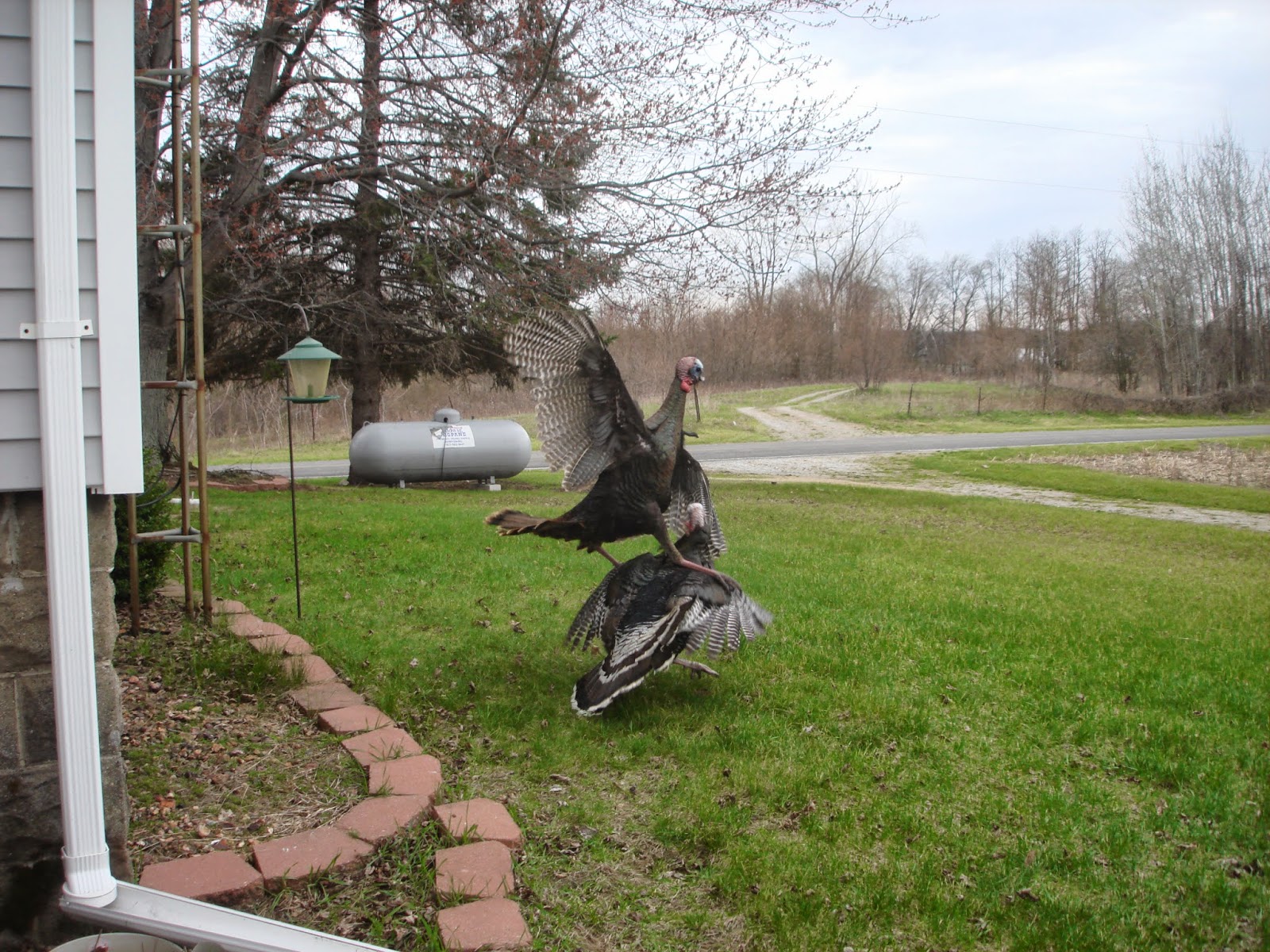 This isn't cool. We assumed our tom might win any such face-off...however, he may be older...but is it fair to pit wild versus domesticated?  Our turkey is at risk of being punked!  Mr. young turkey has likely spent many hours wrestling with his young juvenile turkey buddies in the fields in prep for such mating season...but I certainly don't want our guy to lose an eye at the very least over a girlie dispute.
This photo here is one of Mr. wild-thang getting a bit of the upper foot on our big-ole-dude.  Not cool. Time for the intervention I spoke of earlier.

Minutes after this photo we brought in our two young fox terriers to chase mr. wild thang off...and that they did.  If we can have our little fox terriers chase him off every time he comes around hopefully he will lose interest here and find a nice young female somewhere else soon.

Never know what might happen next here in the country?  Can't say I ever would have guessed THIS to happen.

Meanwhile...might be time to sketch and draw some turkey.
Posted by Rachel Dickson at 7:32 PM No comments:

there is absoLUTEly nothing that compares to....

watching talented (oh so talented) people collaborate and create something that seems to simply pour out of a place beyond themselves as if they are channeling something beautiful. Whether this be an artist creating a painting, a dancer following the rhythm, or musicians playing and singing to something beyond the tune.

Here's an example of what I'm talking about...

In a world where we are constantly bombarded by sensory input (smartphones, texting, facebook, snapchat, news media, and all other various sources of noise) I worry about not being able to just sit quietly and watch the birds soar overhead without "need" of anything. Just to be present, in the moment.

I know I've missed many fascinating details of moments that came across my path because I was distracted by something that was truly meaningless...in so much that the outside world told me it was important (such as to watch the Superbowl).

This is why I like to stand in the chicken barn and just watch the chickens interact with one another and with their surroundings...for in doing so I hope to not lose my ability to be still and soak in the details of the present moment.

I also find myself more and more simply standing with a cup of coffee in my hand and looking out the window into the backyard in the hopes that I might spot some wildlife out there that I'd not noticed before. Because this past winter with all the snow we had, it was pretty obvious to see just how much wildlife exists around us here for all the hundreds of deer tracks surrounding the house.  How could I miss them? How did I not see these deer with my own eye? There were literally feet from the back door of the house and I had no idea they were there. And now...I find myself more vigilant in being aware of my surroundings a little bit more. For this is life. I want to experience this presence.

Posted by Rachel Dickson at 8:10 AM No comments:

time for the "name that chicken" game... 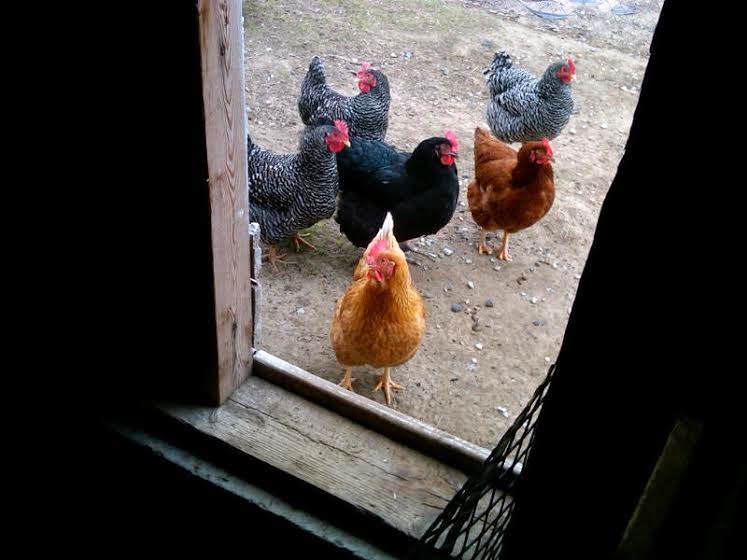 Here's a recent photo taken through the "chicken hatch" from inside the barn looking out into the barnyard. And as a side note here...the reason these gals are looking so inquisitive is because we had just let the new rooster we got last week into the barn and they clearly knew there was a "new guy in town" and were curious...like chickens do.

So anyhow...can you figure out which one of these gals in the photo here is name "hokey toe?"

the chicks are HERE! 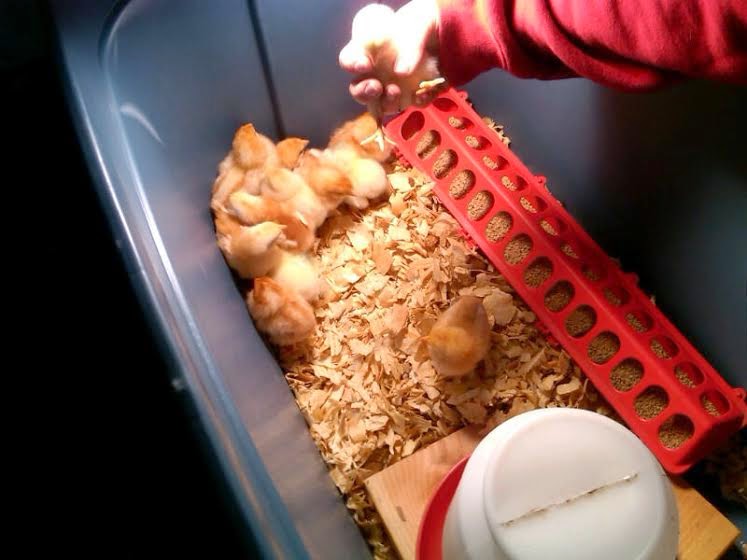 I don't know for sure...but I'm thinking that the best birthday gift ever is a dozen chicks (thank you Chris). Which of course in a few months will (hopefully) turn into a dozen eggs a day.

Little baby chickens are SUPER fun to watch. Like juveniles of any species exploration, discovering, eating, sleeping and ..... are all part of the deal.

And I'd forgot that chicks have a distinct smell. Not a foul one (thankfully) but very distinct.

Looking forward to seeing how these little gals turn out...and what names they earn for themselves in the process.
Posted by Rachel Dickson at 6:05 PM No comments:

Raccoon amongst the deer...

is what I saw tonight when I got out of my truck in the driveway at home to admire two female deer standing in the cornfield beside the house who were also staring back at me.  Then...to my dismay..saw a dark blob wandering not far from where they were standing.
Blast! A coon. So I stood there and watched. No sign of raccoon activity in the chicken barn as of yet...but this is the second time in a week that I've seen this coon in this same place.
Some of the chickens are still perching high in the barn roof rafters due to the last raccoon incident...so I'm not too worried about them. Nonetheless, I don't want mr. or mrs. raccoon to be swiping eggs either. Guess I'll have to be a little more vigilant now I know there's another masked bandit in the neighborhood.
In the mean time...I did think it was most interesting that the deer didn't seem to mind one bit that that ole raccoon was meandering around in the same cornfield as they were.
Funny how nature gets along better than humans sometimes.

Posted by Rachel Dickson at 6:17 PM No comments:

As an avid art collector myself...I totally get that we only have so much wall space to display these paintings in our homes. Yet we ALL have refrigerators that make great galleries for artwork too!

So here's some of my latest creations...check em out by clicking here.

Refrigerator art abstracts.  These little abstracts are painted with acrylic paint on 2 inch by 2 inch ceramic tiles with magnets attached to the back for easy display on the frig or anything metal for that matter.

The newest 6 pieces incorporate the 2014 Pantone Color of the year too! "Radiant Orchid!"  Who knew painting with pink could be so much fun?

In the mean time...onward and upward for the arts!
Posted by Rachel Dickson at 3:32 PM No comments:

I've officially been bitten by the drawing bug! Having always loved pen and ink pieces along with mixed media of pen and ink and watercolor...I'd finally decided, "hey, maybe I can do this."

So in the spirit of trying something new...here's a few examples of what I've been working on. I thought blank envelopes would be a cool thing to draw on...and also easy to share with others.  As with anything art...the more you create something the better you get at it...so mailing these to others forces me to have to keep drawing! Some of my friends have already been gifted with one of these drawing experiments thanks to a stamp and the delivery of the USPS.

Hopefully you've not been bored with my barnyard tales here on the blog and wondered what ever happened to my artwork.

More new art to come!  I will be posting soon about the mini-abstract refrigerator magnet art I've been working on too!

Have something specific you want me to draw? Send me your thoughts in an email.

Until then...onward and upward for the arts.


Posted by Rachel Dickson at 10:05 AM No comments: