Graduation is right around the corner!

We all know there are many special dates, holidays, occasions and reasons to give gifts. And Graduation is right around the corner.

As that young person you know is celebrating the beginning of a new era in their life...why not give them something that they will cherish for the rest of their life? Give ART!

Check out the HOT off the press first issue of my enewsletter! Naturally an envolving project...I would love to hear your comments!

If you're not already signed up to receive this "all things art" enewsletter take a second and join. It's easy.

Just click the image above and enter your name and email. Since it's an opt in list...you'll have to go to your email after you sign up and click on the confirmation email to complete the sign up process.

Cheers! and onward and upward for the arts!!
Posted by Rachel Dickson at 9:25 AM No comments:

moved my office outside...

The weather as most of you know has been STELLAR lately! So I couldn't help myself when it came to moving my office outside for the afternoon.
Set up a temporary studio on the picnic table in the backyard and soaked up some sun while working on some new paintings.
Drawback of painting outside? Your paint dries faster than you really want it to.
Bonus of painting outside? Besides the obvious of simply BEING outside...both dogs, and one of the indoor cats, Lito, was exploring the great outdoors while I was busy painting away. The chickens are cluckin around scratchin up bugs and such...and I hear the traditional "something is wrong" chicken call. "Baulk BAULK bak bak bak bak". (For those of you who've heard chickens cluck before...you know what this sounds like). Anyway, I looked up and then cracked up when I saw that Lito was "hunting" the chickens...in so much that when the rooster caught wind of the impending pounce did the typical head down charge beak forward in an effort to ward off Lito from his hen pals (... let me just say here that if Lito HAD actually touched one of the chickens he probably would have been shocked by doing so and freaked out in a stunned sorta manner). HILARIOUS!
Just another episode in the domesticated pets meet farm animal variety. Probably not something most folks get to watch from their desk. Gotta love country livin!
Posted by Rachel Dickson at 11:47 AM No comments: 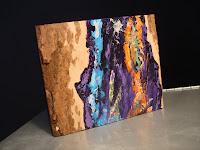 The word "aboretum" being the original Latin word for a place where trees are cultivated for special purposes, like scientific study...yet not the greatest word to title a painting. However, related to the word "aboretum" is "arbor" (meaning shady place with sides and roof formed by trees or shrubs) which is what I chose to name this painting.

This painting is still available for purchase! Click here to view "Arbor" on the online gallery.

Not only is this painting painted onto a part of a tree...but it also represents a sort of flowing between and hedged giving a safe feeling. I love not only how the abstraction of color came out in this piece...but also how the wood itself perfectly frames it in.

Worried about not having enough wall space to add this to your collection? NOT TO WORRY! It's a mini-abstract original measuring only 5.5 inches wide by 4.5 inches tall...AND the BEST part???? It's affordable! With shipping it's less than $36 dollars. YEP!

Purchase "Arbor" for your own collection or give as a gift.
Posted by Rachel Dickson at 8:13 AM No comments: 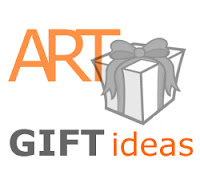 Art is an often overlooked wedding gift, probably because most people consider it too expensive, or think that they don't know the couples taste well enough. The good news is that you can find great art to buy as a wedding gift that doesn't cost an arm and a leg.

Original artwork is one-of-a-kind. Fantastic pieces of original art are available for any liking, taste, color-scheme or genre. So if the couple you're buying for are avid art lovers or if they are simply seeking to start their collection with a piece they acquired together...you MUST give them art!

Posted by Rachel Dickson at 1:08 PM No comments:

I've always admired trees. Having grown up in the farmlands of NorthWest Ohio, naturally there was loads of open terrain...acres and acres of corn and soybean fields. Trees generally were in clumps here and there...or at the local park.

Of course, I'm sure it's not just me. Trees seem to whisper calm as we stroll by them on a walk through the woods or a hike up a mountain. Inspirational on their own accord.
And google "happy trees" and guess who's artwork appears? Bob Ross. So yes, trees don't just inspire me. :-)

Which is why I choose to paint on wood. Especially wood that still has the bark intact. It's like putting art on art.
This image above depicts a colorful railway tie that in itself could be hung on ones wall as art. Just something about wood...that inspires me. Nature's art. Love it!

Onward and upward as nature inspires us!
Posted by Rachel Dickson at 11:51 AM No comments: