my heart is wrenching....

for all my dear friends in the Smoky Mountains.

I am praying for rain.  Much rain.

Peace and love to you  my friends.

Posted by Rachel Dickson at 8:43 PM No comments: 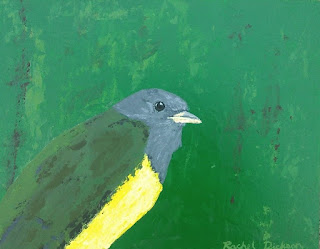 Here's my latest installment of songbird paintings.  This is a "Mourning Warbler" and what inspired me to create this particular piece was the potential wow factor of the eyes.  Um, yeah.

Songbirds are so much fun to paint...but the challenge is to get the eye's right.  Because if you jack up the eyes...well...you jack the entire painting.  (Of course you have to get the beak and body right too...but the essence in my opinion is in the eyes.)

Yet another fun painting complete!

This "Mourning Warbler" painting is made with acrylic on gesso board and measures 11"x14".
Posted by Rachel Dickson at 10:17 AM No comments: 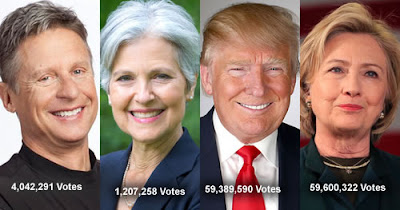 It was anyone's guess who would win the 2016 U.S. Presidential election. I don't think I'm alone in saying I truly expected Hillary Clinton to become the next U.S. President.

I am most amused by the fact that the media's take on it seems to be...."how did we get it wrong?"  Pfft. The media doesn't seem to understand it's not about them.

Regardless....it's stunning to me to see how truly close this race was. The image above lists a total count of the popular votes cast for Gary Johnson (Libertarian), Jill Stein (Green) and of course Donald Trump (Republican) and Hillary Clinton (Democrat). Again these are the popular vote totals as of 1:30pm EST 11/9/16.  And per Electoral vote totals, Donald Trump has been declared the winner.

But look at the margins.  Yet again...it's obvious our country is CLEARLY DIVIDED as to who should be our leader or whatever the criteria was that individuals chose to cast their votes for one over another.

This also means that 64,849,871 American's are feeling pretty crappy right now.  Nearly SIXTY FIVE MILLION people didn't vote for Donald.  And yet....the 59,389,590 that did....I imagine have a much happier feeling....maybe?  Can't truly really speak for anyone else.

However...realistically, NONE of us know what's to come.  I think that's just it.  The unknowns are a bit unnerving.  Let's face it...whenever there is a "regime change" we never really know what to expect.

One thing IS for certain...there WILL be changes.

Here we go for yet another wild ride.  And here comes a FLOOD of actions or non-action regarding promises given during the campaign process.  (Actions DO speak louder than words...so BRING on the ACTION!)

In the mean time...I'm glad the dog-and-pony-show has finally ended!!!  Can we move on and talk about something else for a while?

Maybe I should be giving t-shirts away that say "I survived another presidential election!"


Posted by Rachel Dickson at 10:49 AM No comments: