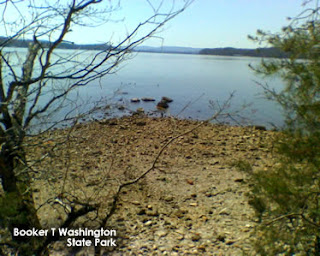 Couldn't stand it. Had to get outside and enjoy the beautiful weather we had here today!!! Sunny and 67!

So drove over to Booker T Washington State Park off Hwy 58 and hit the "mountain bike trail" on foot again!

What a FAB trail! Even if you do have to step aside every so often to let the bikers pass. No big deal. The views on this trail are awesome! A little meander through the woods, a little walk along the bay, a bit of hills and truly a great workout can be had!

I took a few "short cuts" this time around since I was more familiar with this trail today that I was the last time I hiked it. Still managed to be out there for a solid 2 hours. Stellarness!!!

Glad to say, my boots are holding up. Yeah for that!
Posted by Rachel Dickson at 4:53 PM No comments: 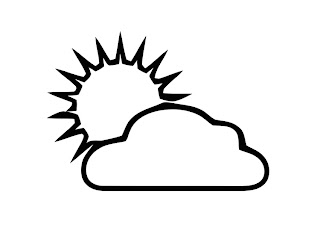 It's in cloudy days like these that I'm reminded...that I don't truly appreciate a thing until I don't have it...and in this instance...I'm referring to the Sun!

The other day while convincing myself that "hey, this is no big deal, all these cloudy days" and "maybe I could live in Seattle" and then of course the following thought was, "RACHEL, STOP! be careful what you wish for. Why would you choose to experience cloudy days et-nauseam?"
So, three cheers for sun. It's predicted we'll see it here again on Friday coupled with 68 degrees!! for which I am EVER so grateful!
Posted by Rachel Dickson at 6:07 PM No comments: 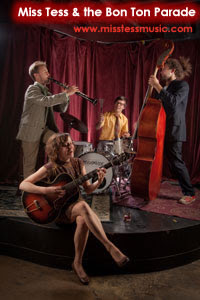 For those of you who know me...besides the outdoors and original art, I LOVE hearing live jazz and/or big band performances! And since moving to Chattanooga...finding live jazz has been a bit of a challenge (although in all honesty...it's likely that way everywhere but maybe New Orleans if I were to guess...as jazz isn't one of the most adored genres by the masses). So anyway...I was thumbing through fyi weekend "events" paper published by the Times Free Press and there in big bold letters was "JJ's hosts swing, comedy."
(yes, I too thought swing and comedy was an interesting pairing...but hey...whatever).

What really caught my eye in the paper was a big photo showing members of this band "Miss Tess and the Bon Ton Parade" along with their instruments... guitar, sax and upright base. Had me at upright base and sax!

But as I dug for a little more info I found this group's website and listened to audio clips on their myspace page. OH MY Goodness! And they're from Brooklyn! ok...another reason I now was interested in seeing their live performance.

Can I just say...I fully believe Miss Tess's voice can be compared to that of Diana Krall! So here I am now seriously considering going out to JJ Bohemia's downtown where they would be performing on a Tuesday night at 10p. And then...I happened to catch a live radio interview with Miss Tess and her Bon Ton Parade on WUTC fm. Ok, this was no accident...me hearing this interview. Now I KNOW I have to go hear this group. And I certainly wasn't disappointed!

LOVE this group! I did get to meet and speak briefly with Miss Tess and Alec the saxophone player too. Good people, talented musicians...and Miss Tess, stellar vocalist.

Here's a little write up I found online about Miss Tess:

"Equipped with her 1920s Weymann guitar, a satchel full of new songs and joined by a stellar band that includes upright bass, saxophone & clarinet, and drums, Miss Tess is ready to make sweet music for your ears with her fifth release Darling, Oh Darling. The Boston-based singer-songwriter is best known for her ability to invoke the sounds of Classic Jazz and Roots Americana circa the 1930s-50s with a distinctive spunk and imagination that shows that she is much more than a tribute act. She springs a new life into some of the best styles of yesteryear with the dozen original compositions on her latest record."

Modern, fresh take on Classic Jazz and 30's Era swing. yep...that's what I'd call it! I mean can you go wrong with upright base, sax, clarinet, guitar and drums and a vocalist with a special talent for this style of song?

I may just have to go hear them play in Nashville at the Lovelace Cafe in September.

Check this group out! ...and if you've ever read Outliers by Malcolm Gladwell and the chapter about the 10,000 hour rule, then you'll understand me when I say, Miss Tess and the Bon Ton Parade is well on their way to their 10,000 hrs!!
Posted by Rachel Dickson at 6:35 PM No comments: 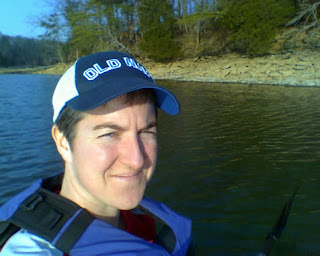 Isn't it funny how Spring flirts with us? Warm 60s - 70s one day, then back to 50s the next. I think it just makes us appreciate things more...call me crazy.

So I couldn't resist grabbing my kayak and paddling on Harrison Bay Monday when it was near 70 degrees outside. Shorts, tshirt, crocks, boat, pfd, waterproof cellphone case, bottle of water, boat and paddle in tow off I went.

As you can see by the photo...it's been a while since my eyes have seen full sun. And the water was beautiful!! 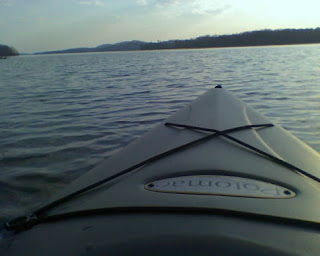 It was most fun walking past all the picnickers to get to the water as I put in near the Marina at Harrison Bay State Park. (there's more evidence that everyone has cabin fever BAD...and is dying to get outside...the park was pretty busy with folks fishing from shore, picnickers and families taking advantage of some much needed outdoors time.)

Since I'm still getting used to navigating wake (there were quite a fishing boats up and down the bay and there was even someone water skiing that day) ...I stayed close to shore as I paddled around the peninsula to the other side of the park and back. I'm also still not used to paddling a body of water as big as Harrison Bay in my little boat. But frequency will bring confidence...so I'll go back as weather permits. :-)

Yeah for watersports! ...and I'm so looking forward to further exploration of this beautiful body of water.
Posted by Rachel Dickson at 5:52 PM No comments: 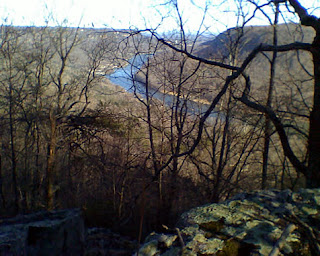 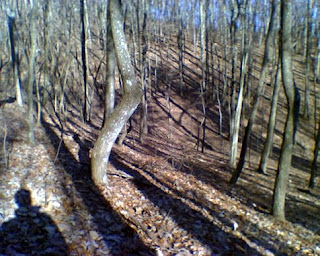 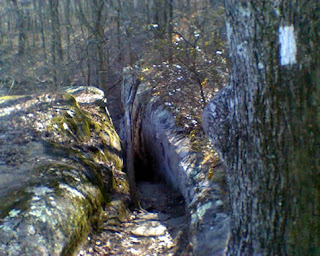 I hiked for about an hour that day...as once again, the arrival of dusk pushed me out of the woods. But it was well worth every minute! Prentice Cooper is quickly becoming one of my favorite wilderness areas here in the Chattanooga area! (as if you couldn't tell). :-)
Posted by Rachel Dickson at 5:25 PM No comments: