Bad day for Puff-Daddy the rooster. 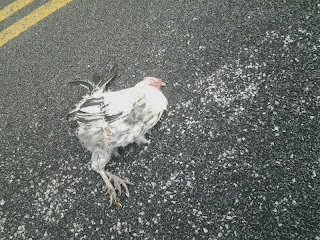 Well, the era of Puff-daddy (the greatest yard-guard rooster ever) has come to an abrupt end.
But first...you need to know a little more about why this matters.
Two years ago on new years eve day...after having heard the notorious sound of urr, ur, ur, UR URRRR around 3am that morning and wondering if I was hearing things because we didn't have any roosters at that time....discovered that this rooster had in fact just randomly showed up in our yard...and chose to called it home.  (Maybe he took a liking to our hens...although over time...our hens developed a love-hate relationship with him).
The kids promptly named him "Puff Daddy" partly due to the fact that he puffed out his neck feathers when he was in attack mode in the back yard...and also very loosely after the American rap artist with the same name (I think mostly just for the fun of it).  The name stuck. 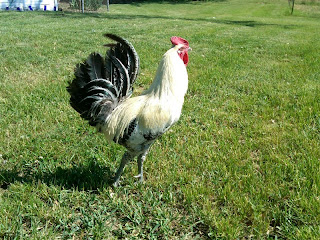 It quickly became a common occurrence when I went out to the chicken barn to feed and water and gather eggs that pdiddy came zipping around and usually he and I had a quick sparring bout that would wisely end with him backing down.  (You would think he would catch on that I was feeding and watering his harem).  He was quite the backyard patrol officer.
There were a few times when Joe-Joe the pug would innocently be wandering through the yard and out of nowhere BAM, pdiddy would run up, pop poor unsuspecting Joe and then wander off back to coral his hens.  Joe of course would skiddishly look around with a look of "what did I DO?" on his face...and sheepishly retreat back to the house.
Once a year we clip wings so that the hens can "fly the coup" and then wander out of the yard.  About this time of year...the wing feathers have grown out enough where they all can "fly the coup" and a small group of hens and pdiddy would wander across the road seeking wiggly treats in the brush in the field.  Day-after-day we could hear pdiddy across the road crowing in delight doing what he loved, protecting his girls.
We didn't think much of them crossing the road because none of these birds are "darters".  They one by one would gingerly cross the road in a manner that if by chance a car would approach, there was plenty of time for the driver to see these birds and slow down long enough for them to cross.
Well, apparently last Sunday someone didn't slow and woop...bird-down! bird-down!
Ironically, the energy in the barn has changed.  The hens seem to be a bit happier that their mostly oppressive patrolmen is no longer roaming the yard.
He did father some chicks while he was here. Only two of them remain.  One a beautiful black hen and the other, the now-moved-up-in-rank, rooster who was aptly named "pdiddy junior" (which I'm sure more stories and photos will follow here).
Pdiddy has in fact earned a place in the pet cemetery and will be buried amongst the animals that made us smile the most.  Rest in peace Puff Daddy.  Although...I can walk the yard with a much broader sense of ease now.  No risk of getting popped.
Posted by Rachel Dickson at 9:29 AM No comments: