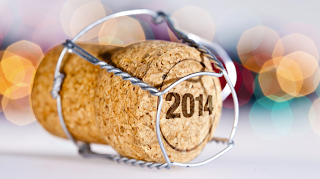 ....you will be more disappointed by the things you didn't do than by the ones you did. So throw off the bowlines. Sail away from the safe harbor. Catch the trade winds in your sails. Explore. Dream. Discover.

This quote is on the cover of a card I received some years ago and have had it hanging above my desk ever since.  It's the perfect reminder to me as we enter yet another new year. (hard to believe 2013 is nearly over!)

At the end of a year I always find myself reflecting upon what all happened within that year...and of course, like most folks...I consider what I'd like to see happen in the upcoming new year.

A few things on my list....
~start a new chicken flock to keep up with the demand of farm fresh egg sales
~relaunch the blogtalkradio show "Art Speak" (http://www.blogtalkradio.com/dicksongallery)
~attend the 4bridgesartfestival in Chattanooga
~paint bigger paintings (like maybe 6 of them)
~invest in a small solar panel to continue offsetting utility costs
~sled on the whitehouse tubing hill so can experience to new STAIRS that were built this summer!

Be safe and HAPPY NEW YEAR!!!
Posted by Rachel Dickson at 6:23 PM No comments:

ya'll gone and done it now! 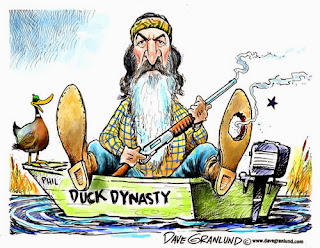 Thanks Dave Granlund!  Dave Granlund has been an editorial cartoonist, published in daily newspapers since 1977. And I totally agree with his depiction of this situation.  "Phil Robertson done gone and shot his own foot."  (Any celeb or politician or media known will tell you...watch what you say or it will effect your bottom line).

I'm sorry but I just have to comment on the recent events regarding the statements made during an interview by GQ's Drew Magary in the article titled appropriately "What the Duck".  Then of course there's the video that's gone viral on youtube.

I saw the hubbaloo in the news about it.  Shortly after I'd just finished watching season one of Duck Dynasty on Amazon Prime and liking the show!  Yep, this show is pretty dang entertaining...funny...and sometimes a little...uh...tv.  But when I heard about the news craziness going on regarding Phil I thought....what is this about and where is it coming from?  So I went looking for the facts. What did Phil say exactly? I read the entire GQ article and then watched the whole 50 minute video (in parts) posted on youtube by "ourbereachurch".

This isn't a free speech issue. It's just not. Ok, yes, you can say whatever you want to say in America but freedom of speech comes with some ramifications too.  According to www.billofrightsinstitute.org "Freedom of speech in a self-governing society demands that citizens act with moderation, respect, and responsibility."

But hold on one second.  In the land of free speech, how can we forget some other famous folk who got themselves into hot water by their words.  Remember Mel Gibson? No one can forget Mel Gibson telling a policeman during his 2006 DUI arrest that "Jews are responsible for all the wars in the world."  And how about Paula Deen? She practically lost her business empire and was fired by the Food Network after she found herself caught in the middle of a racially charged controversy. Then there was Michael Richards.
During a 2006 performance at the Laugh Factory in Hollywood, the former "Seinfeld" actor shouted racial slurs to black hecklers in the audience, used the "n" word several times, and even referred to lynching.  And I don't remember anyone rushing to shout "free speech, free speech" during those controversies.

Then there's the issue of credibility. Sure enough...I cannot argue the credibility Phil Robertson has regarding duck calls and duck hunting. The man's clearly an authority on this subject.  But why might he be considered anything close to an authority regarding gays?

One might argue because he's "quoting the Bible?"  Really?  Does it say what he says it says?  Phil picks and chooses here as to exactly what the Bible "forbids".  Here we go yet again...the topic of Bible and context.  (Yet another broken record.)  Used yet again to make a point while at the same time exhibiting bigotry for the sake of "I'm better than you" bible taunting?  Come on.

Best article I've read on this issue....check it out titled "Everyone is a Biblical Literalist until you bring up Gluttony".  What?????? No you didn't just say that Rachel Held Evans.  THANK YOU for bringing up the topic of buffet lines and the Bible.  Truly a brilliant read and extremely well articulated from someone who understands the whole of the real issue.

I won't question for a second that Phil knows what he's talking about when it comes to hunting ducks...but you want to declare yourself as an authority regarding what the Bible supposedly says?  "Heartless, faithless, ruthless, senseless?" And yes, since this all has come out in the media a joke around our home now has become "we invent ways of doing evil....on a daily basis" Um, yeah that's my MO every day. Sure.

This is all just dumb. Ignorant. Dumb. Stupid.  And I'll say again this isn't about freedom of speech.  Because yep, anyone is free in America to say what they want...but when comments turn derogatory words become harmful.

So what is the issue here then? This is a Golden Rule issue.  Matthew 7:12 states, "Therefore all things whatsoever ye would that men should do to you, do ye even so to them: for this is the law and the prophets." And Galatians 5:14 says, "For all the law is fulfilled in one word, even in this; Thou shalt love thy neighbor as thyself."  Words "do" too. Words can do harm.  Shouldn't we consider this when we consider the issue of free speech?

We can't go into any store and not see something that is covered with images of Duck Dynasty right now.  And when I see these I can't help but be reminded of this whole debacle. It's just sad. And so goes tv.
Posted by Rachel Dickson at 7:21 PM No comments:

what are those??? and Merry Christmas. 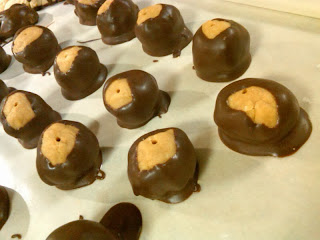 Just in case you don't know...these are "Buckeye Candies".  Which also happen to be a Christmas favorite in Ohio.
I mean...if you're FROM Ohio...you know what a Buckeye is...and you've probably eaten a BUNCH of the candied version as shown here.  So of course these candies are a huge favorite to gift at the holidays.
I'll break it down for you...basically you're looking at a homemade version of a peanut butter cup.  Primarily because these are made from peanut butter, confectioners sugar, butter and chocolate.
NO Christmas is complete without them. And are tons of fun to make actually.  Send me a message of you want the recipe. I'll be happy to share.  rachel(at)racheldickson(dot)com.

And a joyous, VERY merry Christmas to you!
Posted by Rachel Dickson at 9:05 PM No comments:

announcing...exciting stuff for an artist!

It's here it's here!!! The Pantone Color of the year (2014) has been announced! And why does this matter you say?  Watch...watch for the soon to be released decor in stores. Watch for clothing colors and jewelry colors coming soon.  You will see a lot of this color...or tones of this color.  And naturally as an artist...one must paint accordingly so as to match the trends! 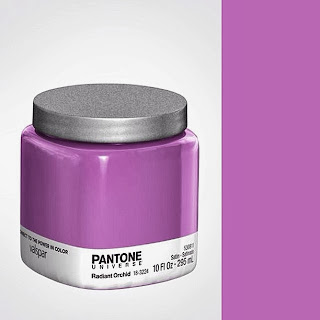 Since Lowe's carries paint samples in many Pantone colors and most definitely the color of the year I now have this color to paint with!  Super excited...new abstracts on the horizon with Pantone Radiant Orchid as the theme.

http://www.racheldickson.com
Posted by Rachel Dickson at 8:54 PM No comments:

Where the Wild things are... 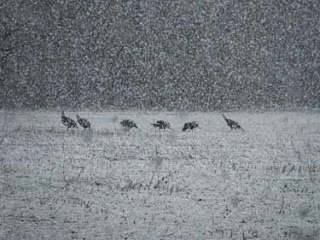 I feel most at ease outside.  So when the snow falls like it did over the last 48 hours here in Northwest Ohio...it's understandable my auto-response is to be a little stir-crazy...coated with a bit of needing to get outside.
And it's an added blessing when you do get outside and stumble across something wild, doing what wild things do...yet lingering long enough for you to see a glimpse into their world.
This happened Saturday morning.  I was waiting by the back door for the dogs to do their business. It was snowing (there was already probably close to 6 inches on the ground) and was hazy...sorta foggy-ish.  When something caught my eye all the way through to the other side of the yard and into the adjacent cornfield I saw a group of something moving around on the hill.  Deer I thought at first...but then...they moved different than deer.  Then I heard it...a familiar mweh mweh mweh mweh sound.  TURKEYS!
Why this matters most is because this past March we had purchased a tom turkey who was roaming the yard...and after a wild flock of turkeys paid a visit to the surrounding cornfield and woods...poof, tom turkey went missing and hasn't been seen since.  We assume he joined that flock.
Fast forward a few months and we purchased 2 more turkeys, this time a hen and a tom.  So you can imagine my dismay when I see and hear this wild turkey flock wandering the field directly behind our barnyard!  Don't wanna lose these 2 to the wild ones too! I grabbed boots, hat, coat and dashed out to the barn to check on our birds and see whether said wild turkeys were putting on a show and inviting ours to join up with them on their "what the wild things do" adventures.
I smiled when I peeked around the barn and saw our hen and tom. Hen was chirpin away inside the fenced barnyard at the wild flock and tom was all poofed out as if to encourage his girl to stick around and ignore all those "other" birds.  Wildlife cracks me up sometimes.  Very simple, mostly peaceful lives.
After feeding our turkeys (yet another move to remind them both why they should stick around) I watched in admiration at this flock of wild turkeys appeared to be playing in the snow. Running around chasing each other darting single file through the cornfield towards the woods.  It wasn't too long before they were out of sight but I could still hear the echoes of mweh mweh mweh coming from the woods.
Wonder when the next time is they'll come through for a visit?
Posted by Rachel Dickson at 8:43 PM No comments: