One great idea...always leads to the next problem to solve 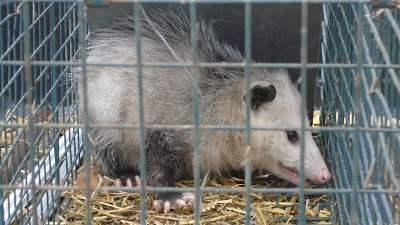 I've mentioned here before that we live in the middle of wild-kingdom.  What do I mean by that?  Well last summer and fall through a process ...I started with a hunting camera in the barn to "discover" what all predatory animals were coming around trying to take out my chickens.

I have countless photos of various possum and raccoon and the occasional wild cat that milled in and around the barn each night. (I was leaving the barn door open at night primarily for air flow/circulation).

So...I came up with a plan to live-trap these various predators and ....eliminate the problem.  (I'm not going to say here what the specific plan for elimination was...so I don't incriminate myself...but it was successful)

I think I caught no less than 4 possum and the biggest raccoon I've ever seen!  (took both hands to carry to trap with that buggar in it...I bet he weighed 40 pounds)

But after removing something like 5 or 6 of these pests....my camera was still capturing photos of MORE.  So apparently...if you have chickens...the rodents will sniff them out...and there is a unlimited supply of these said visitors.

I realized at this point...I was fighting a futile battle.  um duh!  Why not close the barn up at night?  Wouldn't THAT solve the problem??

stay tuned for the rest of the story
Posted by Rachel Dickson at 5:54 PM