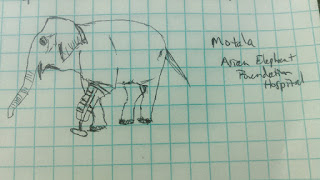 Not sure why, but I've found myself suddenly interested in elephants.  This may have some to do with my recent discovery of the Elephant Listening Project (click on this link to learn what the ELP is all about).

And then drawing elephants caught my attention.  So while looking for images of elephants to inspire some new drawings...I came across a most fascinating story of an elephant named Motala and the world's first elephant hospital.

I was inspired to make a little sketch of Motala.  Might even one day create a painting or two or a larger drawing (as this ones just a few inches wide).

In brief, Motala, an elephant landmine survivor, stepped on a landmine near the Burmese border in 1999.  But thanks to the efforts of Soraida Salwala and her work creating the world's first elephant hospital, Motala now wears a prosthetic and is doing well some 17 years later.

click here for images and info about Motala from ABCnews

It's stories like these that inspire me to reach for things that have substance/meaning, to engage in our surroundings, to pay attention to those who are making a difference...(even if it may seem trivial to some to help elephants).  These things serve as a reminder that trivial crap like social media, television programming, and countless other time wasters are just that...time wasters.  We all can make a difference if we will just pay attention.

Thank you Soraida Salwala for your passion and caring for injured elephants and to your whole hospital team!

Posted by Rachel Dickson at 10:40 AM No comments: 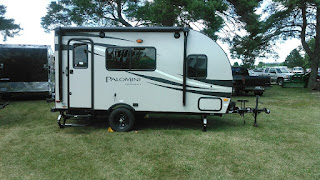 I was wandering through the merchant area during the 2016 Delta chicken festival a few weeks ago...and this caught my eye!!!

The Palomini Travel Trailer by Palamino!!

Oh my...what a beauty.  Not too big, not too small.  Perfect for the many future adventuring ideas I have in mind.

This particular Palomoni is owned by the Toledo Blade newspaper and their marketing folks use it when they travel around to various fairs and festivals to peddle subscriptions to the newspaper. This sounds fun and all...but if I had one of these gems...I'd surely take it on a US wide travel tour.

So this being said...if you have one of these beauties parked and lonely somewhere...and you're looking to donate it to a good cause?  Uh, pick me!
Posted by Rachel Dickson at 9:39 AM No comments: 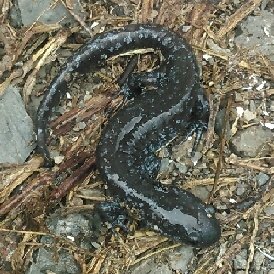 Who knew that there are salamanders in Northwest Ohio? Yeah, me either.  Until just the other day...after some pretty heavy rains, I went outside to refresh the ice supply in our "chicken eggs for sale" cooler.

Since water from the ice collects inside the bottom of the cooler, I dump it out...and have found some pretty interesting things hiding under the cooler when I pick it up to dump it.  Toads and frogs mostly...until this little dude showed up.

The photo above is what was hanging out under the cooler.  A salamander, just chillin. (pun intended)
After some research...it seems to match the description of a "blue-spotted salamander."

I've seen a lot of pretty cool wildlife in this here region of Ohio...but this one's a first for me.  A blue-spotted salamander.  Who knew?

Well, I'm off to find more adventures...until next time...always more to come!
Posted by Rachel Dickson at 9:39 AM No comments: