Let yourself BE you! 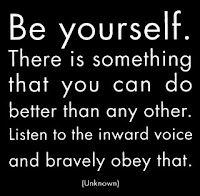 I don't know about you...but I've grown really tired of being bombarded with "what I want", "what I need", "what's missing in my life", "what I can't live without", "what will make me truly happy" and on and on and on goes the bullshit that the advertisers feed us on a daily basis!

The truth is....I don't need any of this crap. It's just stuff. And with stuff comes the need to organize it, store it, worry about losing it, cleaning it and so forth. I really don't want to spend my precious time on more stuff.

In fact, thanks to the Universe I already have all I need...every day.  No more stuff.

And this goes for who I am too! Seems as if everything outside of myself is generally geared towards trying to change me into something different.  No need. I am all that I am.  And as difficult and challenging as it is sometimes to just be true to ourselves...it's where peace lies.  Peace in knowing that I am perfect just the way I am.  And so are you.

That being said...absorb all that 2016 holds for you fully.  It's gonna be a grand year!!
Posted by Rachel Dickson at 9:55 AM No comments:

There it IS!! And it was obvious that nearly everyone in the room saw it too!


I used to love to sit and watch my sister create various baked goods in the kitchen when I was young. I didn't understand it at the time...but I now know that it was because what I was really watching was her creative process and her joy and passion SHE experienced throughout that process. And...nine times out of ten the finished product, be it cookies or a cake, or pastry, turned out amazing...and...I got to taste test (an added bonus of course).

Over my years I have learned to spot this passion in others too. And without fail...I'm drawn to it.

Here's a few examples:
Musicians in jam sessions...playing their hearts out, ad libbing with the other musicians there and creating a sound that would never be heard like this again.

Painters caught up in the creative process, when you look into their eyes there is such a concentration, such a focus....that you can hardly wait to see the strokes they add to their painting and what colors they'll use and watch attentively for what will emerge.

Teachers who are passionate about their subject. They have such a way of engaging their students and passing on that same passion and in turn drawing out the best in their students. Challenging them to become better at whatever the subject may be...be it mechanics, music, education, athletics, etc.
And on and on I could go.

Goodness...I know I'm not doing what I've seen of these moments in people any justice in trying to describe it here. But I saw it again Tuesday night.

The moment however that I've been referring to here throughout this post was during the presentation for Carole King.  It will help to understand  (reference http://www.caroleking.com/bio) that Carole King and her husband at the time Gerry Goffin (with input from Atlantic producer Jerry Wexler) wrote the song "(You Make Me Feel Like) A Natural Woman" in the late 60's and was immortalized by Aretha Franklin.

It is said by Joe Marshalla that the greatest gift you can give to another human being is "generating such a safe place around your being that that person can be free to be who it is they actually are in that moment."

Exactly what happened next!!!!

Watch for yourself.
Aretha Franklin (You Make Me Feel Like) A Natural Woman - Carole King - Kennedy Center Honors 2015

So who do you suppose was introduced to come on stage and sing this incredibly moving song? You guess it...none other than Aretha Franklin. The performance that followed by Aretha was electrifying! But deeper than the performance and plain as day...was the response that Caroline had as Aretha performed. Caroline completely embraced who Aretha was in that moment...and set her free to just BE in that moment...and so did seemingly everyone else in the auditorium. It was beautiful!! To watch Caroline in her complete and utter joy watching Aretha so gifted and so amazingly talented as a singer... and clearly a seasoned veteran on the stage...and of course Aretha brought the house down...first by sitting at the piano and playing along while she belted out "A Natural Woman" followed by her standing and facing everyone in the room and giving us a glimpse of a passion for singing and performing like no other!  Thank you Aretha Franklin, for sharing your gift with us!

Want to see this for yourself?  Click here.
Be prepared to be moved!

Do you see it too?


Posted by Rachel Dickson at 9:34 AM No comments: