Ode to Jinx, rest in peace my little friend. 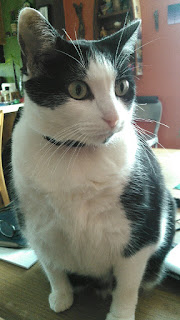 I'm very sorry to have to relay this here and include this post.  Have been stalling because I don't really want to write this.

But Jinx (my black and white cat buddy) passed away recently.  What a "legacy" Jinx left behind!  Full of spunk and spit and brimstone that one was.

From day one when I found Jinx as a kitten...to the very end of her days...she was hard-headed and loaded with personality.  When she was young and full of energy you never knew what she was gonna do next.  In fact, I had to sleep with a spray bottle next to me because she took great pleasure in jumping on my chest when I was sound asleep.  I'd fly up out of the bed, yell her name and blast her with water.  It was a BIG GAME to her!

When I first got Jinx...it took me quite a while to settle on a name for her.  Then I came across this GI Joe action figure...a female ninja.  This was the card description and fit her to the T:

"Jinx studied and competed in three forms of martial arts from the time she was seven until she graduated from Bryn Mawr. Upon arriving in Japan for a vacation, she discovered that her family had been ninjas for generations and she was officially initiated into the clan. Jinx was recruited for the Joe team by Snake-Eyes.
Don't underestimate Jinx. She has been to the Secret Mountain and studied the Seven Silent Forms with the Blind Master. She has the Eye That Pierces, the Iron Hand and the Heart That Waits. She can see through your deception, batter aside your defenses and dazzle you with the strength of her will." 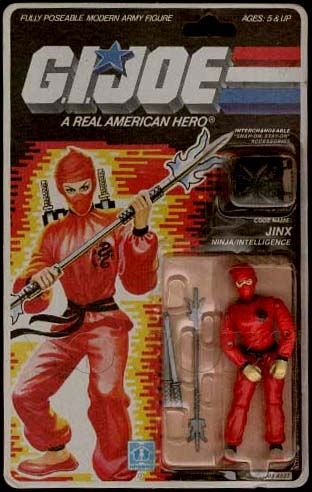 No, DO NOT underestimate this cat! And she most certainly would dazzle you with the strength of her will!  That was her....to the T.  So Jinx became her name.

As Jinx got a little older she developed a fetish with water.  And earned herself the nickname "lily dipper"...as depicted in this photo.  Any glass of water left unattended became her drink before too long. 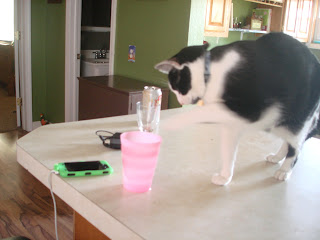 Other nicknames she had were "darkness" and "jinkee."  (Our newest cat addition in the house was named after her..."darkness junior" or "DJ.  He is VERY much like Jinx was when she was younger. I'll talk about him later).

When in Tennessee she LOVED to mess with lizards.  One day I forgot to close the door that led downstairs to the garage and came home to this...tail-less little fella.  He was still alive but when I picked him up and put him outside....I said...."Now that you've experienced a little bit of what can happen to you when you come inside...I suggest you run and never return."  Seemed to work...I never saw him again. 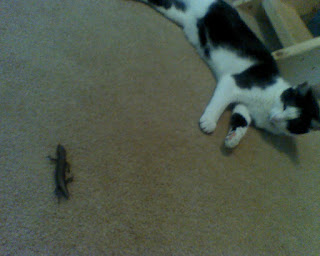 She also loved to hang out on my computer monitor...literally.   I think it was another way to "intrude" and "impede" upon what I was doing in order to get a rise out of me...but in time I just left her be and she'd actually fall asleep in this position.  I imagine it was warm up there too. 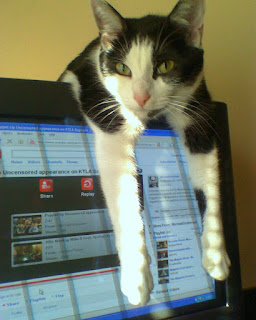 Like every cat...Jinx loved boxes.  She loved to just lay in a box.  One day, the kids made her this box and she slept in it for hours and hours. 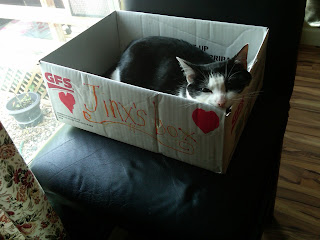 You could always count on Jinx messing with stuff you didn't want her messing with.  So one day...we tested this theory.  Had some scrabble tiles laying around and take a look at what happened next.  Yep, caught in the act!! JINXEE!!!!  Apparently she could READ!! 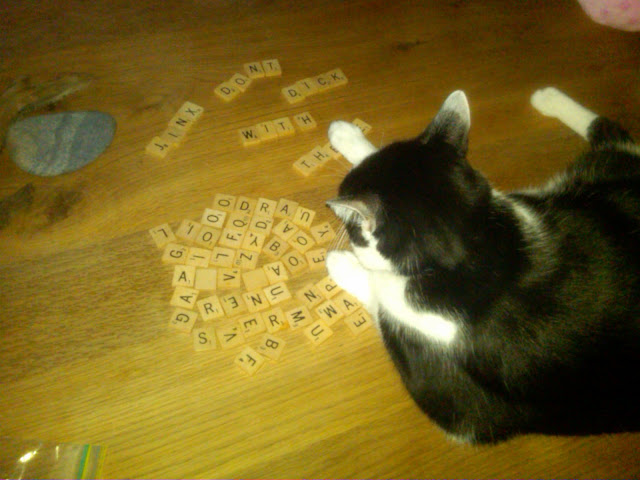 She was never really a fan of any other cat.  Sort of a punk.  Didn't really make friends...but was pretty much the jerk (hence the nickname "Darkness"....she certainly had a dark streak).  Here's an example.  Here she is ninja-chopping it with Lito.  Jinx wasn't very nice...I guess that was the ninja in her. Hah! 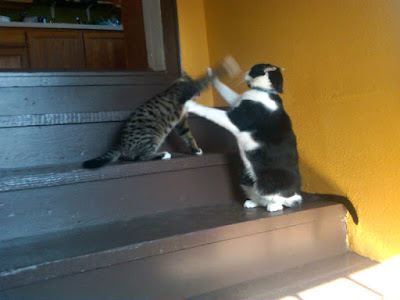 Needless to say...Jinx definitely made a name for herself. She was a good buddy for me when I lived in Tennessee and so we've opted not to bury her here in Ohio....but rather had her cremated so she can be taken back to Tennessee.

Here's one of the last pictures taken of Jinx. She was always good for a selfie! 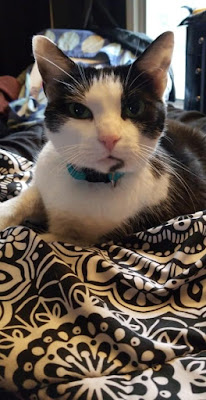 Rest in Peace Jinx.  You are missed!!