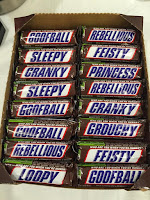 While making a stop at a nearby gas station a few days ago, the Snicker Bar labels caught my attention on the candy shelf in front of the check out counter.

What is THIS, I thought? What's with the goofy labels? And THEN...I saw something that was clearly not right. In the box of candy bars was one with something like 3 bites out of it. Wrapper and all bitten through. I picked this bar up and set it on the counter for the cashier to see and said, "uh, apparently someone wanted to test this out."
The cashier, complete with astonished look on her face touted, "This is the THIRD Snicker's Bar in TWO days!"

I was intrigued. So I looked closer at the box these bars were displayed in. Woop. There it is...simple explanation. Little mouse poops scattered about. Mystery solved. Ironically enough...I couldn't help but notice that the ONLY candy on this ENTIRE shelf touched by said mice were the Snicker's bars. Hmmm, this seems telling. I wonder what fake, synthetic crap must be in all that OTHER candy?

Needless to say...not but a day or so later...we discovered some pretty serious mouse action going on in our kitchen...judging by the mouse buds found in the cabinets and so forth.
(Useless pets! You'd think that with TWO cats and TWO (basically rat terrier) dogs that THIS would NEVER be a problem in our house.  Nope.  So after some verbal scoffing and scolding of our pets (basically informed them they were failing at their jobs and they better start doing their part) out came the mouse trap. (hah! and I scoff at myself for even thinking just one trap would do the trick...but I digress)

Taking a lesson from the Snicker's Bar incident it is pretty obvious to me that the best thing to bait a mouse trap with is crunchy peanut butter. (The proof is in the Snicker's bar, right?)

Goodness! Not 10 minutes later...snap! Success. Reset, repeat. Now it was fairly late in the evening at this point so I decided not to bother reseting this trap until morning. (bad choice). I opened the cupboard in the morning where I had set this trap and the dead mouse had been eaten on, brains chewed on! WHAT?! GROSS! We have ZOMBIE frickin MICE??? I've never heard of such. They eat their own now?  ugh. ick. bleh.

The moral of the story here is...I should have set up some mouse traps about 3 weeks sooner.  I now have two traps going simultaneously and the snapping sounds have tapered off. We've cleared the house of about ten mice now. Did I say, EWWW?  Gross.  Yes, this is gross.  But I insist on keeping these traps set until we go for like a WEEK without catching anything. Maybe longer.

Note to self, apparently it's true that as the temperatures change outside the rodents move inside seeking shelter.  Well, next year maybe I'll try just posting a sign on the door, furry rodents not welcome.

Oh, and the fact that I was dumping the mouse bodies in the backyard seemed to attract a male Northern Harrier Hawk...which was perched outside our kitchen window the morning after mouse bodies had been scattered about the yard. Great. Just great.

Gotta love some country living.  Living and learning here. Every day is an adventure.