The most potent and consequential words in American history! 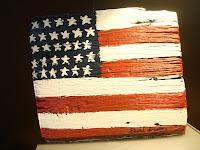 The Declaration of Independence is a pretty big deal! It was ultimately a formal explanation of why Congress had voted on July 2, 1776 to declare independence from Great Britain. (Independence Day  is celebrated on July 4, the day Congress approved the wording of the Declaration.)
Yet in this document was penned what has been called "one of the best-known sentences in the English language", containing "the most potent and consequential words in American history."  The ENTIRE document has come to be considered a major statement on human rights, particularly its second sentence:

"We hold these truths to be self-evident, that all men are created equal, that they are endowed by their Creator with certain unalienable Rights, that among these are Life, Liberty and the pursuit of Happiness."

In honor of the celebration of the United States Declaration of Independence...I painted this painting titled Justice and Liberty for All. It measures 10.75"x9.50" and is painted on aged barn wood.

To view and purchase "Justice and Liberty for All" click here.

Happy celebrating this 4th of July!
Posted by Rachel Dickson at 7:55 AM