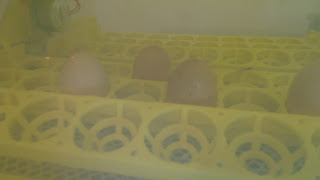 I have to laugh at myself sometimes.  You can have the greatest of intentions and turns out...what you think is going to happen...doesn't happen anywhere close to how you thought it would!  Let me explain...

So last year I purchased "mail-order-chicks".  That is...baby chicks from a poultry hatchery...where you can select specific breeds of chickens.  Just so happened...I picked Black Australorps and Buff Orpingtons for three reasons.  One...they are known to be friendly birds...ie they play well with others.  Two both these breeds are known to be good egg layers.  And three...because they are both breeds that are known to be broody (meaning that at some point during the season they will sit on their eggs with the intent to hatch them).  Which by the way takes approximately 21 days of sitting to accomplish this...so long as the egg has also been fertilized by a rooster. 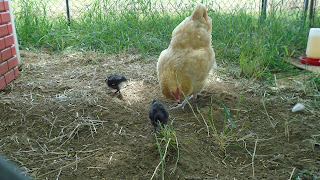 Sure enough...this summer I've had three hens attempt this.  Yet here's the reality of how this plays out.  Chicken up and decides...ooop...I'm gonna hatch some eggs.  So she sits on her nest (sometimes they pick good safe spots to do so and other times not so much)....well...she doesn't get up off the nest much....but when she does...another chicken will come along and "sneak" laying her egg onto the pile.  And before you know it...there's an array of eggs of various dates...some fertilized...some not.  Now eventually one or more of these eggs will rot...for various reasons...and then burst.  Then flies scope out the rot...lay their little fly eggs...maggots then enter the seen...and now you have a big mess on your hands.  A chicken sitting on maybe now 15 or so eggs covered in egg rot and maggots and well you get the picture...isn't at ALL what I was going for.

Two of the three hens did in fact successfully each hatch one chick.  The third just didn't seem to have the same accidental success as the others.  So after watching and dealing with egg rot and flies in the coop and so many unsucessful hatches...it dawned on me.  Why don't I get an incubator and hatch these eggs myself?

I cleaned off the remaining eggs from chicken-sitter-number-three and placed them in my incubator.  I started with about 25 eggs.  I'm down to 4.  The others basically rotted or didn't develop.  But I did finally reach some success just the other day! I finally hatched my first chick just two days ago!!! 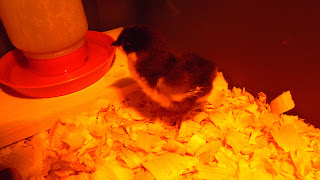 And...I now also have a very long list of "lessons learned" or maybe I should call this list the "well I didn't see that coming" list.

For instance...I thought for sure that by introducing my newly hatched chicken to my chicken momma who was already attune to raising her own little couple-day-old chick that she would just adopt it as her own and chicky-daycare-problem solved.  Uh no.  Momma chicken would have ABSOLUTELY NOTHING to do with this newly hatched chick. In fact...she was quite intent on killing it if I would have let her.  Didn't see that coming.  There went my "after-I-hatch-a-chick-raise-it-up-plan."

So now...what do I do with just ONE chick?  I've never just had one chick before.  No company to keep...no other lil chicks to snuggle into.  So far my lil chick is doing ok...And I'm hoping that of the 4 other eggs I have in the incubator that at least 1 of them will hatch into a lil buddy for her.

She is growing up on her own currently in the tupperware-storage-container-nursery that I'd raised up last year's mail-order group in.  She just is currently solo.  Not ideal for a newborn/hatched anything...but I don't have a choice at the moment.

The saga continues...oh and meanwhile...the count for fox is 12...the count for me...newly hatched chicks is 4 (3 hatched via adult chickens and 1 hatched in my incubator so far)

Oh the things that life on the farm teaches you!!!  Humbling indeed.