This summer has hands down been one of THE most challenging summers dealing with the local wildlife and their increasing interest in my chickens to be the main breakfast lunch and/or dinner course.  Apparently the word has gotten out...although I realized that chickens sort of tell on themselves.  Chickens are talkers.  I'm not really sure what all it is they talk about...but if you sit outside and listen it's very obvious that chickens live here.  And I'm not talking about the rooster.  Everyone seems to think that just roosters are loud and obnoxious but no.  Hens are chatty cathies too.  They apparently have much to say to one another...so between the obvious smell of chickens living here and the sounds of their cackling and cabitzing there's also the visually obvious.  My chickens enjoy wandering about the yard hunting for bugs and eating grass. This is where the snatch and grab comes in.  Mainly the fox.

Yes...a fox.  First time in my life I've had to deal with a fox prowling around.  I've seen this fox a couple times now...mostly after she has already killed one or two of my chickens.  For a fox it's easy pickins jumping a chicken in the yard.  And is extremely discouraging to lose your chickens two at a time to a fox.

So after much a do...I've finally decided to build a fortress around the barn.  Nature has spoken...it's time to protect the birds.  We've lost nearly a dozen hens this summer to the fox...so as they say...if you can't beat em...or defeat em....join em (or in this case...build a better protective fencing system around your birds).

Between the redtail hawks/ great-horned owl/ raccoons/ possums/ skunk and fox...nature has spoken.  Obviously.  The battle is futile.  So time to shore up the defenses.

Gonna take me some time/ effort/ and a nice chunk of change but between now and Spring....the matrix is going to be changing around here.

These photos below were all taken by my hunting camera approximately 80-100 ft from the back of the barn where the chickens roost at night.  Yep it's wild kingdom out here. 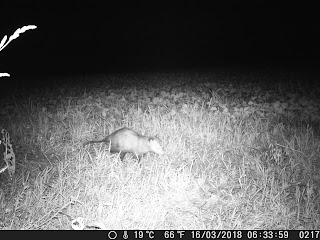 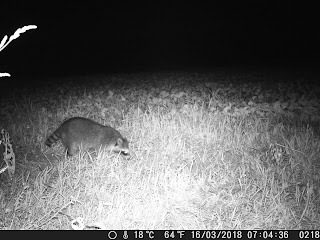 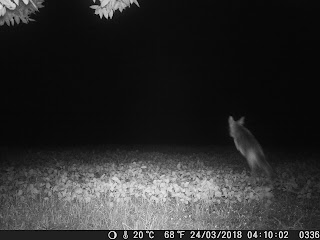