the passing of a barnyard legend 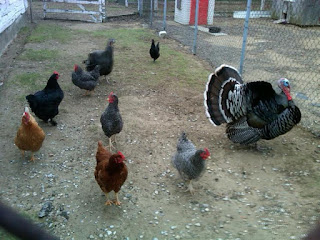 Such a bummer to report that in July we lost our legendary male turkey...Tommy. (Yes, not the most original name for a tom turkey ...noted).

Tommy was approaching 5 years old...which for a turkey I imagine is a pretty stellar life!  He started to show signs of his aging...he developed a cataract in his left eye which eventually covered that eye completely...and it began to effect his ability to navigate around the barnyard.

July 4th I walked in the barn to feed and water everyone...and found him face down on the floor in the straw...as if he just layed down and that was it.  I worried that some predator would take him down...so I'm at least happy that he passed peacefully...and simply from old age.  He was always very healthy and spry...until his final months when his eyesight started to be effected.

We miss seeing him poof and gobble around.  We also miss the wild male turkeys that used to come around and hassle him in the Spring in a effort to gain courtship rights with Tom's female turkey (Sugar Pea...she passed in 2016).

So...rest in peace Tom.  He's now a member of the pet cemetery...with his own solar light.
Posted by Rachel Dickson at 2:02 PM