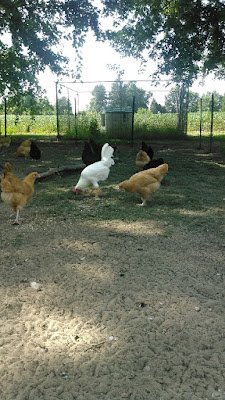 We inherited a new rooster some months ago. He joined our flock primarily because he was young...and needed a home.  (He's one of those roosters that got caught up in the city ordinance scenario...sorry folks...you can't have chickens here (city limits)...especially roosters...so he was gifted to us (country life).

I named him after the Lord of the Rings character Legolas...adapted to reference his incredible long legs...tada...meet Leg-o-Lot!

At first he was shy...and stand-offish.  But it didn't take him long to learn his role of "protector of the realm".

He wasn't competition for the older rooster (Blackbeard) because they were in separate partitioned chicken runs. I did worry that Blackbeard might jump the fence and then pirate pummel Leg-o-Lot...which turns out that did happen...but only once...so they must have worked things out amongst themselves.

Two roosters are plenty to balance our flock of 35 hens. So if you're looking to re-home your rooster...you'll have to check with another farm. We're full up.