What a difference a roadtrip makes! Excerpt 4 of 10. Adventures on the Cumberland Trail. 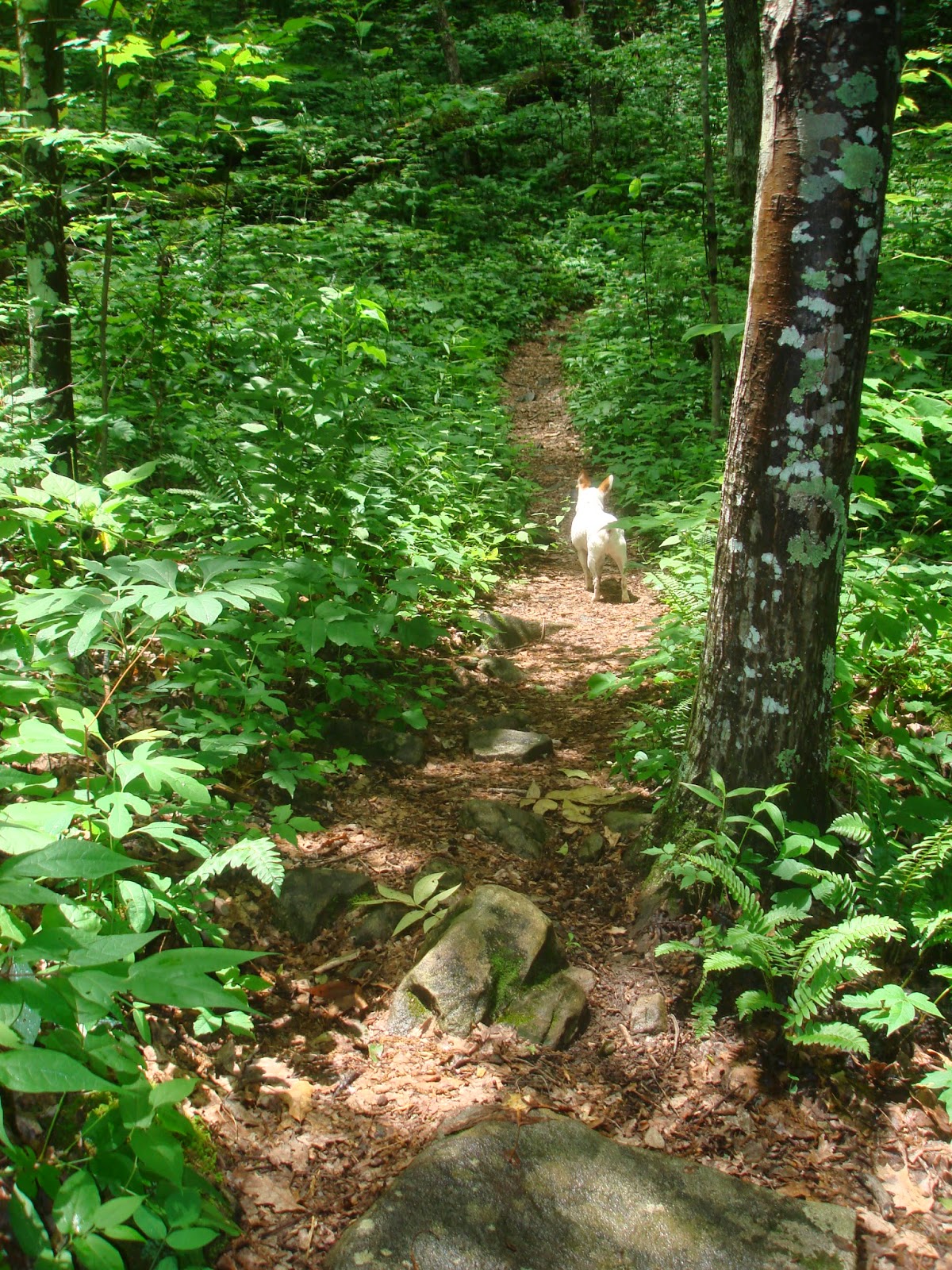 It was finally time to get out into the woods!!!

There are two hikes that Chris and I REALLY like to experience when we visit Chattanooga.

Chickamauga Creek and a section of the Cumberland trail that leads to North Suck Creek (which Chris has aptly named "the death march").

Unfortunately we learned this day that Chickamauga Creek was closed until mid-July (it appeared they were making improvements to the parking area)...so instead...off we went to go see what condition the suspended bridge over North Suck Creek was looking like.

If you take Suck Creek Road up Suck Creek Mountain (opposite Signal Mountain in Chattanooga)...there's a wooden staircase that comes down to the road off the mountain on the West side (this is where the Cumberland Trail crossing the road). And just to the East of this the trail continues across a wooden bridge (over South Suck Creek) up to the top of a ridge-line...across the ridge and down the other side where you'll find one of THE COOLEST suspended bridges that crosses North Suck Creek.  This was our destination today.  The distance from the road to the bridge is 1.4 miles and takes approximately one hour depending upon how fast or slow you walk it. 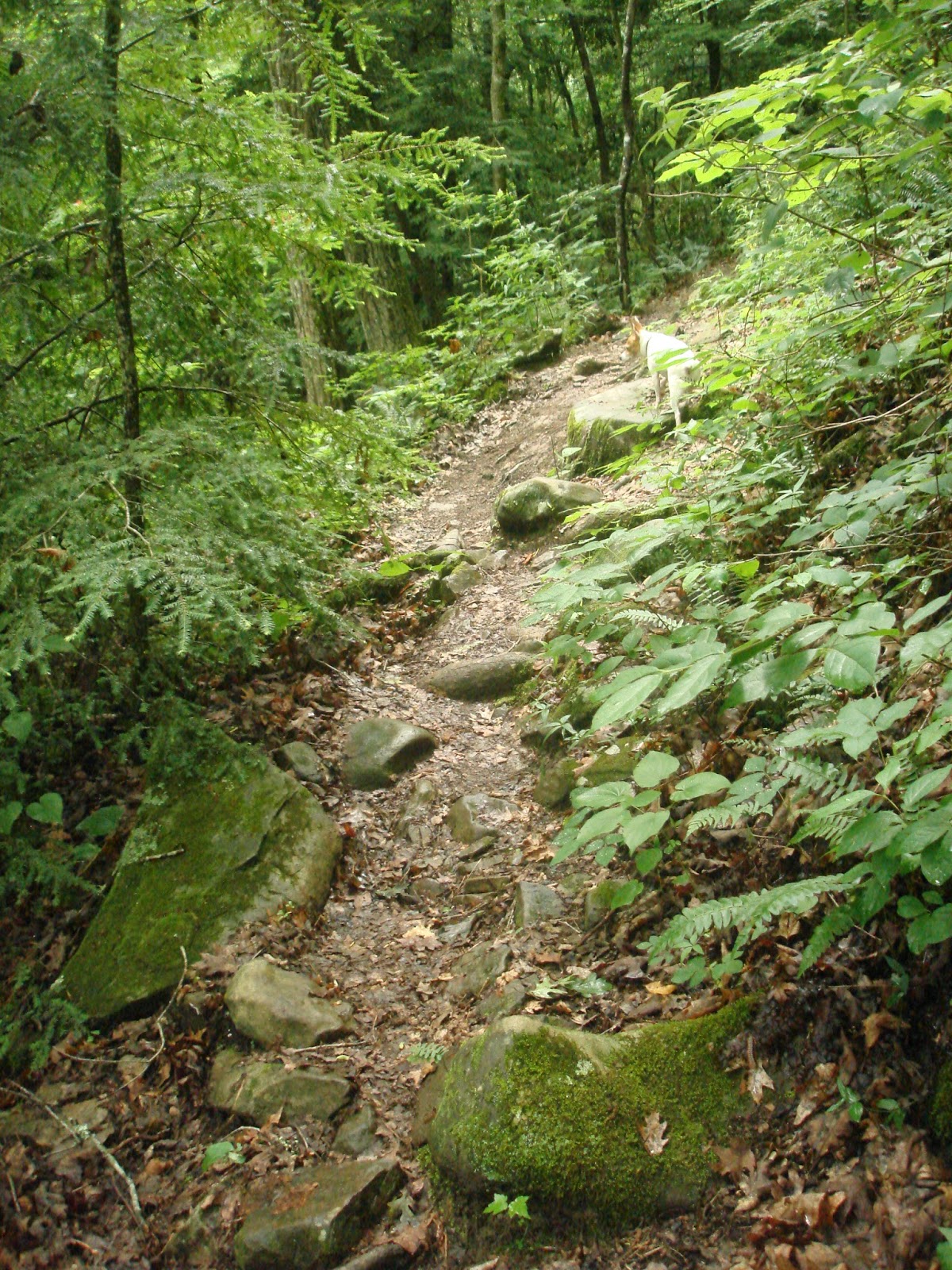 I'd brought Chris to this trail once before so she knew what to expect (as far as the climbing and the descending). Although I'd forgotten how jungle like it can be hiking in the woods in East Tennessee in June. It was overcast so it didn't get really hot which was nice...and we managed to predict the weather well because it didn't start raining until after we'd returned to the car (yeah us!) We also had the dogs with us...and I was a bit concerned what their reaction would be when it came time to walk across the suspended bridge. (Carrying the dogs across was the first plan of action).

I'd hiked this trail no less than a dozen times since 1993 and I'd seen the bridge in all different states of repair. Kudos to the Cumberland trail maintenance crew whoever you are...the bridge on this day had recently been repaired, numerous foot-boards replaced. Guessing by the yellow tape you'll see in a few photos below that before these repairs the bridge had become unsafe to cross.

Adventures of the "death march." 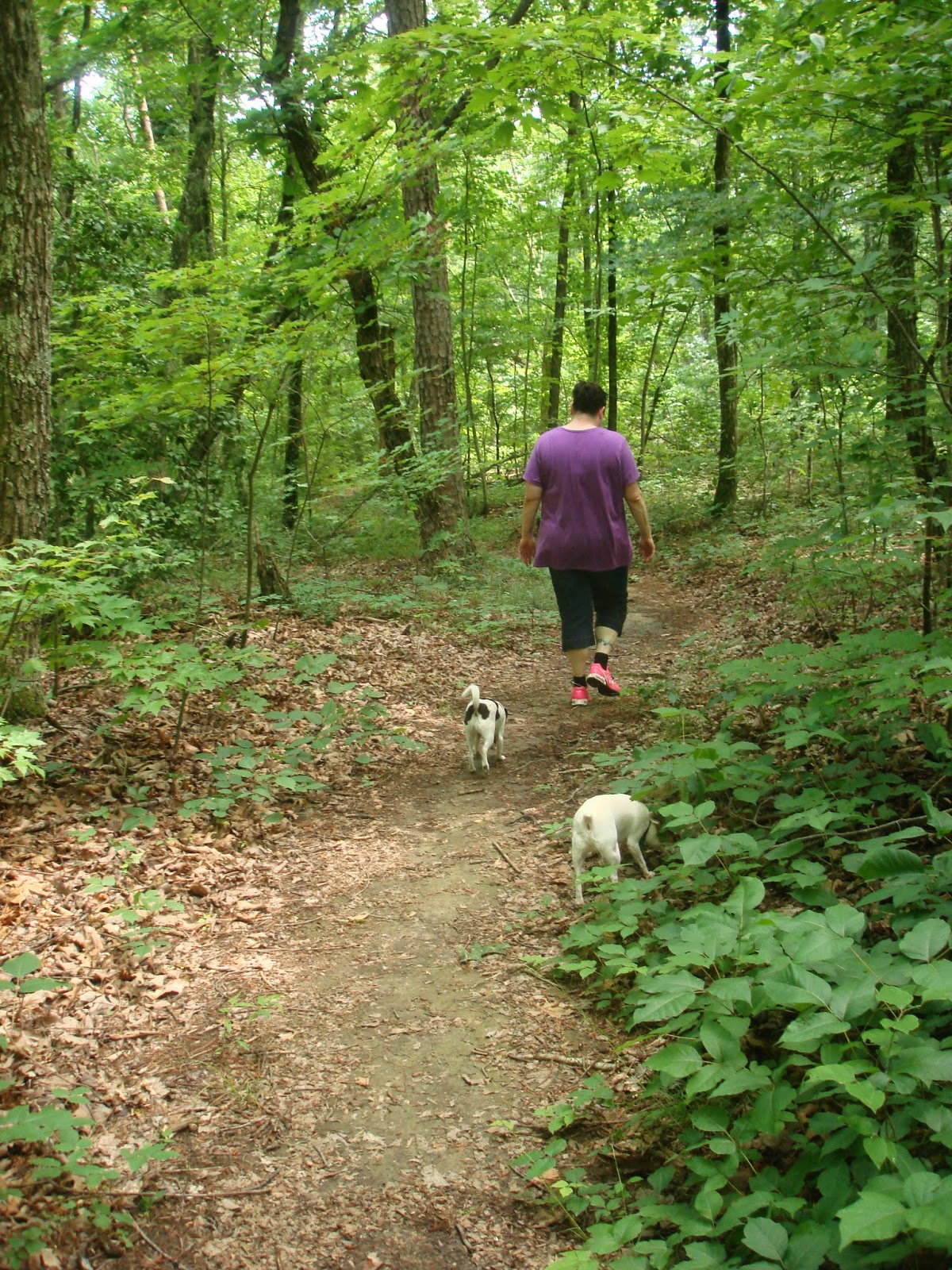 Chris having hiked this trail before...was nervous. I could feel it. I could see it in her face. And I was nervous for the dogs and about crossing the bridge...and the fact that I was taking my three most favorites into the woods and might be presented with potential dangers (heights and poisonous snakes primarily). But in the spirit of Rachel...off we went...for the adventure of it. (spoiler alert...all ended well...no one hurt, all safe, adventure stories to tell!)

This section of the Cumberland trail is one of my all-time-favorite hikes on the planet! It has a steep uphill climb for the first 20 minutes or so...then a flat jaunt along the ridge at the top for about 20 minutes then the decent down the other side which takes about 20 minutes with the coolest creek and bridge as a destination.

Reese HATES bridges, (our black and white toy fox terrier) and Dodi LOVES to swim (our white with a little brown toy fox terrier). They both love to run a trail...so I figured they'd generally come out smelling like roses, likely have gathered up a few ticks along the way (which proved true) and would be pooped the rest of the day. 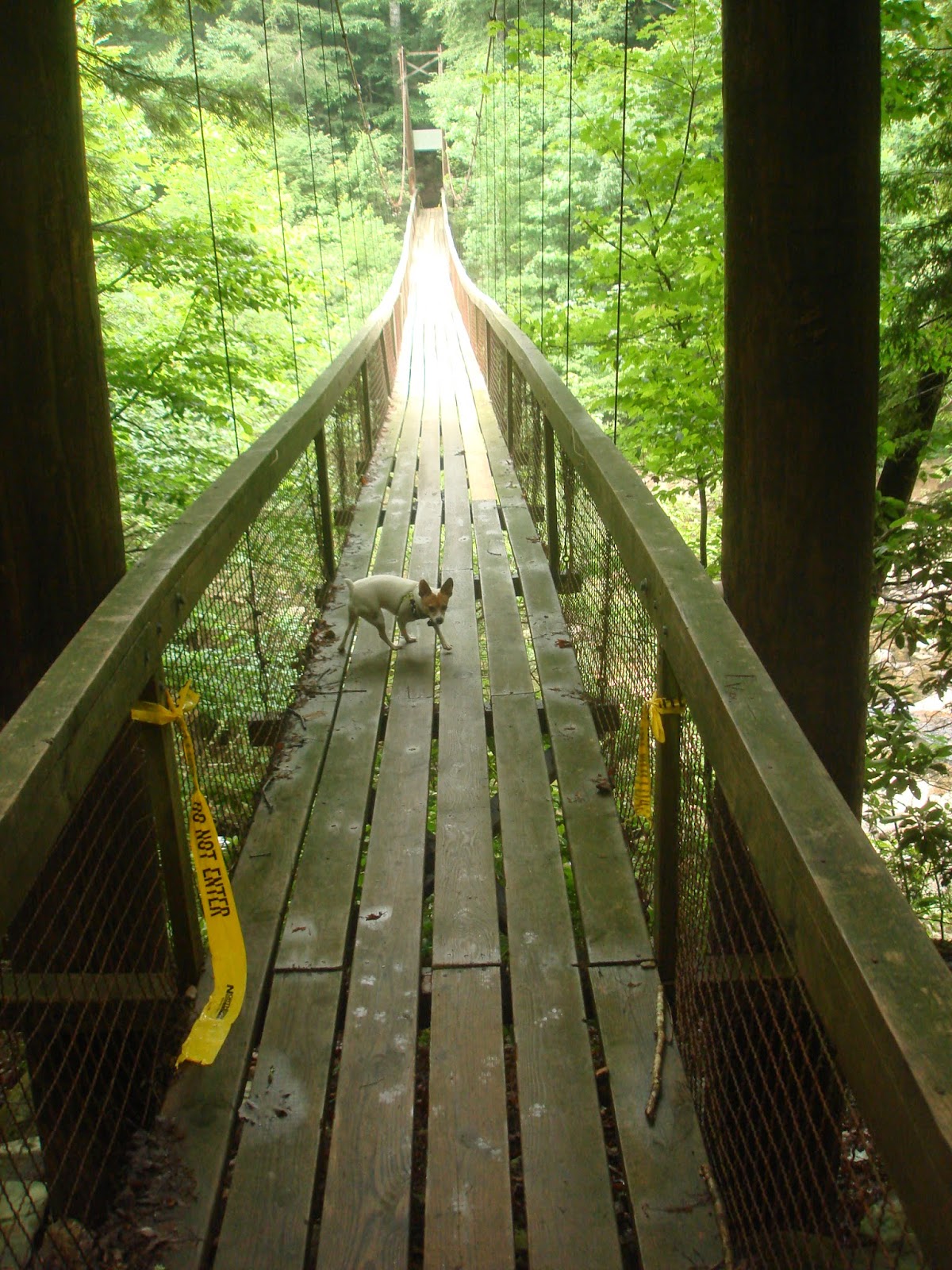 We arrived at the suspended bridge in no time and Dodi was the first to explore the bridge. His foot slipped through one of the slats so that was my clue that to carry both dogs would be the best thing.

As many times as I've walked across this bridge...I ain't gonna lie...it's freaky. It sways a bit as you take each step and if more than one person is on the bridge at a time it moves about even more. It's freaky. And there's a pretty serious drop to the creek below. Yet this bridge is frequented by a lot of hikers...so safety in numbers right?

Tales from the suspended bridge! 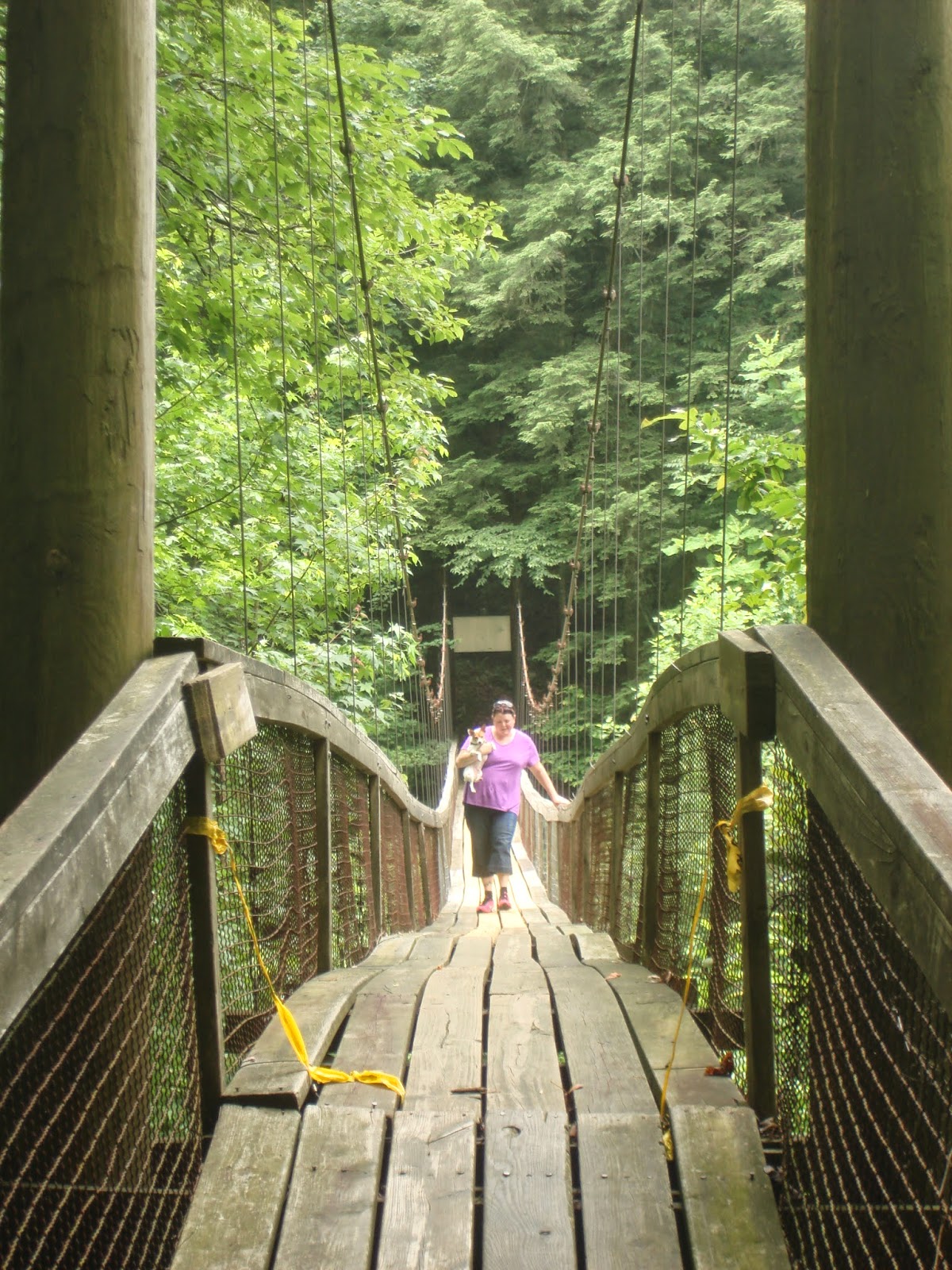 Notice the yellow tape I'd mentioned above. The boards that were used to repair the bridge had to have been hand carried in. Special kudos to whoever humped all that wood. and Thank you!

Here's Chris and Dodi about halfway across. It seemed to be easier to handle the freakiness of this bridge if one of us crossed at a time.

Bummer the creek was so low.
With all the rain that Chattanooga had been getting, I was surprised to see how low the creek was this day. (yet another fun thing about visiting this spot...you never know how high or low the water is going to be...but always plan for some fun swimming just in case). Needless to say, we still got in some good romp around in the water time. Dodi of course jumped right in and swam around. 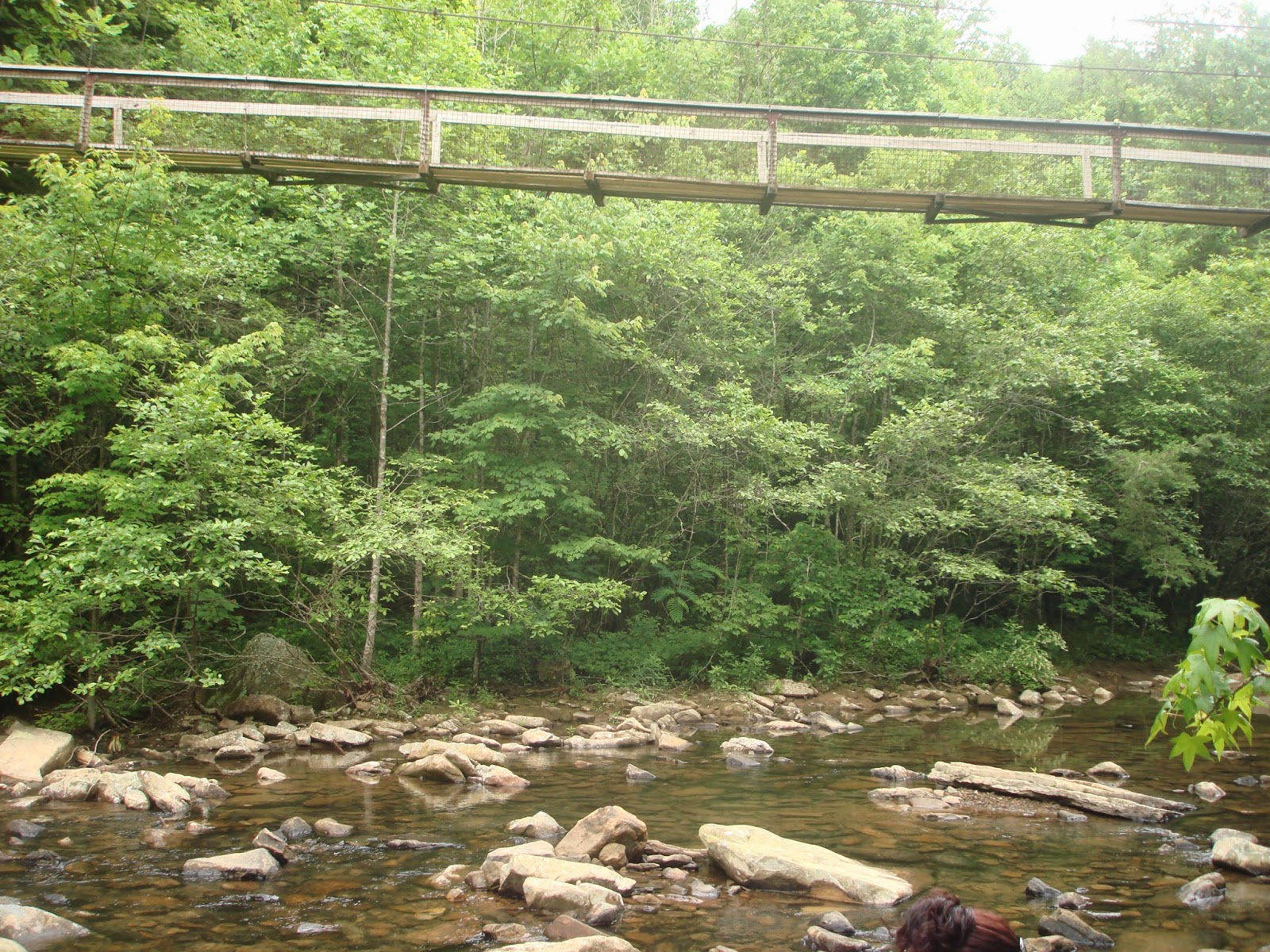 No sooner did Dodi jump in the water than a snake juts out from the rocks and into the water.
The creek was totally clear so you could see this snake swimming around underwater and then turned to look back at us. I'd never seen a snake stay underwater like this one did. (We think this might be a small water moccasin).

Meanwhile, Chris and I are trying to figure out how to let Dodi swim with this snake lurking about. So I said, "maybe if we throw rocks at it it will swim down stream?"  No sooner did I say this than BOOM, Chris chunks this huge rock into the creek and this snake looked like hurricane Katrina just hit it in the face. It worked in-so-much that the snake moved down stream, but not before Dodi jumps into the water after the rock like it was a toy. (not what we planned). A few scary moments later (after he insisted on swimming to the opposite bank just to prove he could) I snatched him up out of the water before this snake resurfaced. 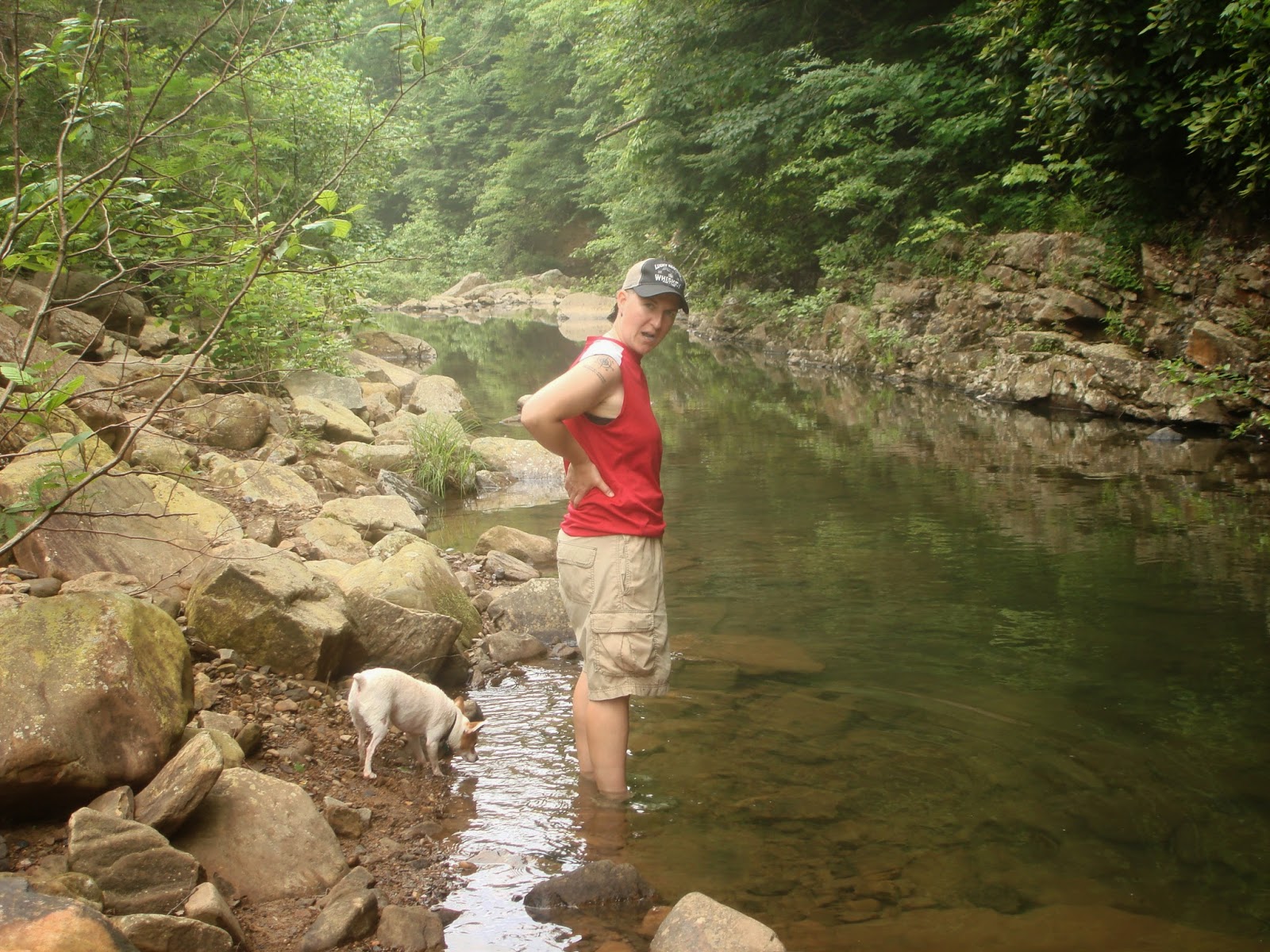 Needless to say, we moved up the creek a bit to let Mr. Snake have some privacy.


The water was COLD!  Typical of mountain creeks...but geez, I'd forgotten just how cold they can be. Hence the look on my face in this photo.


I had intended to swim and float around in the creek, but having hiked the return trip before soaking wet and not really enjoying that...I decided just to wade around. It was refreshing. 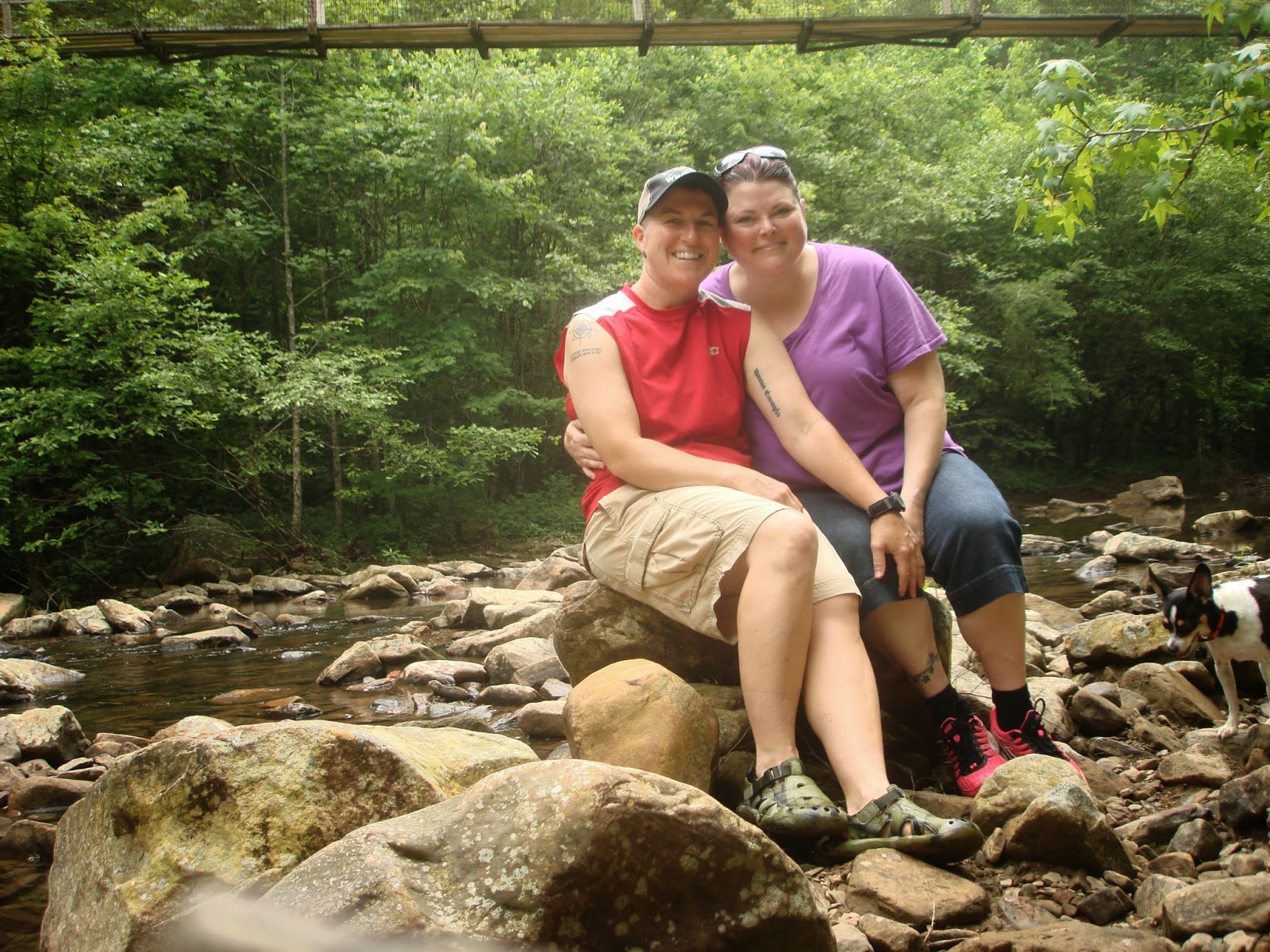 The dogs are always flitting about when we pause to snap photos so we never know who all will be in the photos. Reese managed to get captured in this one above. 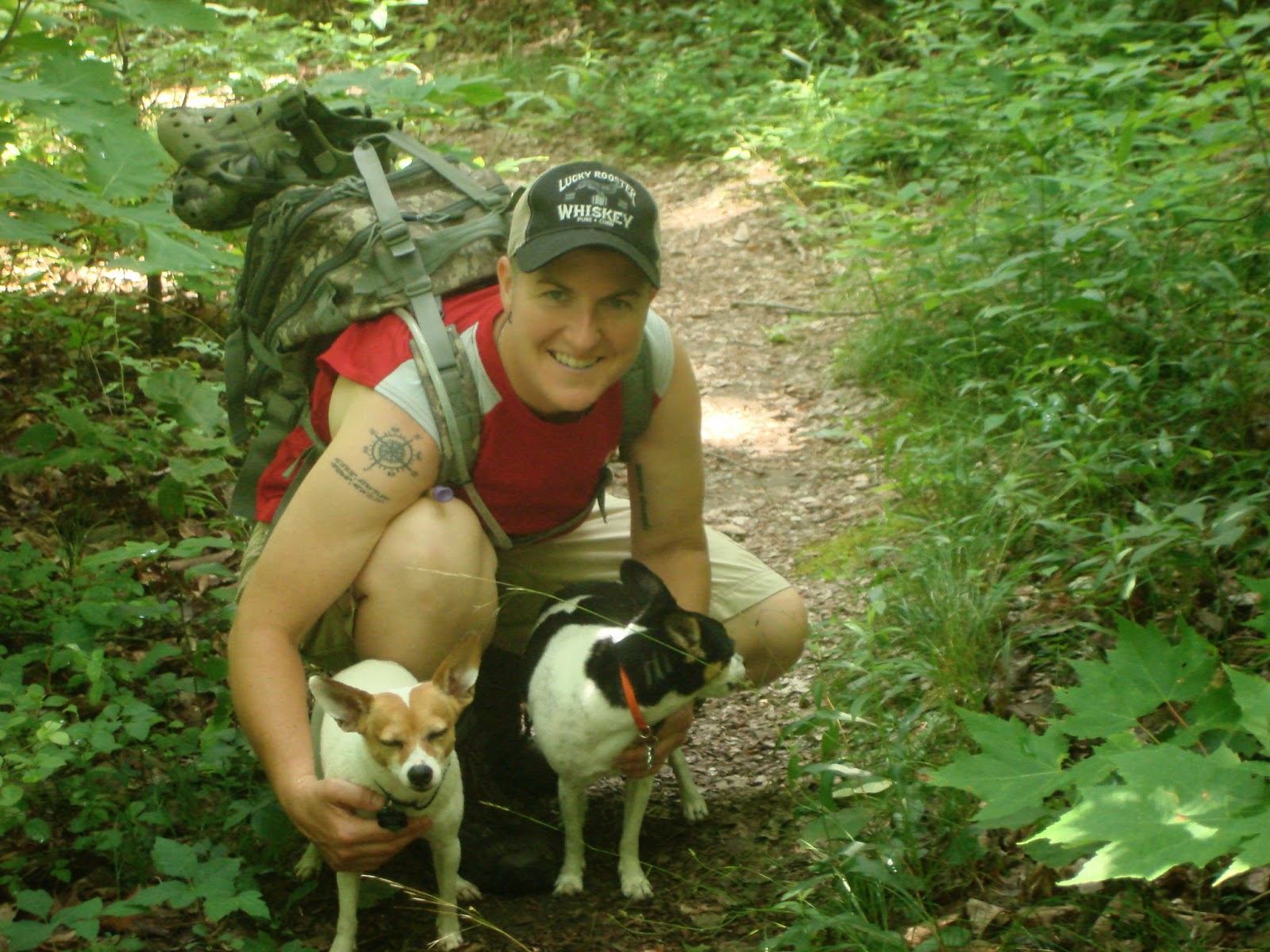 Can't ever seem to get both pups looking at the camera at the same time...but at least you get the idea. 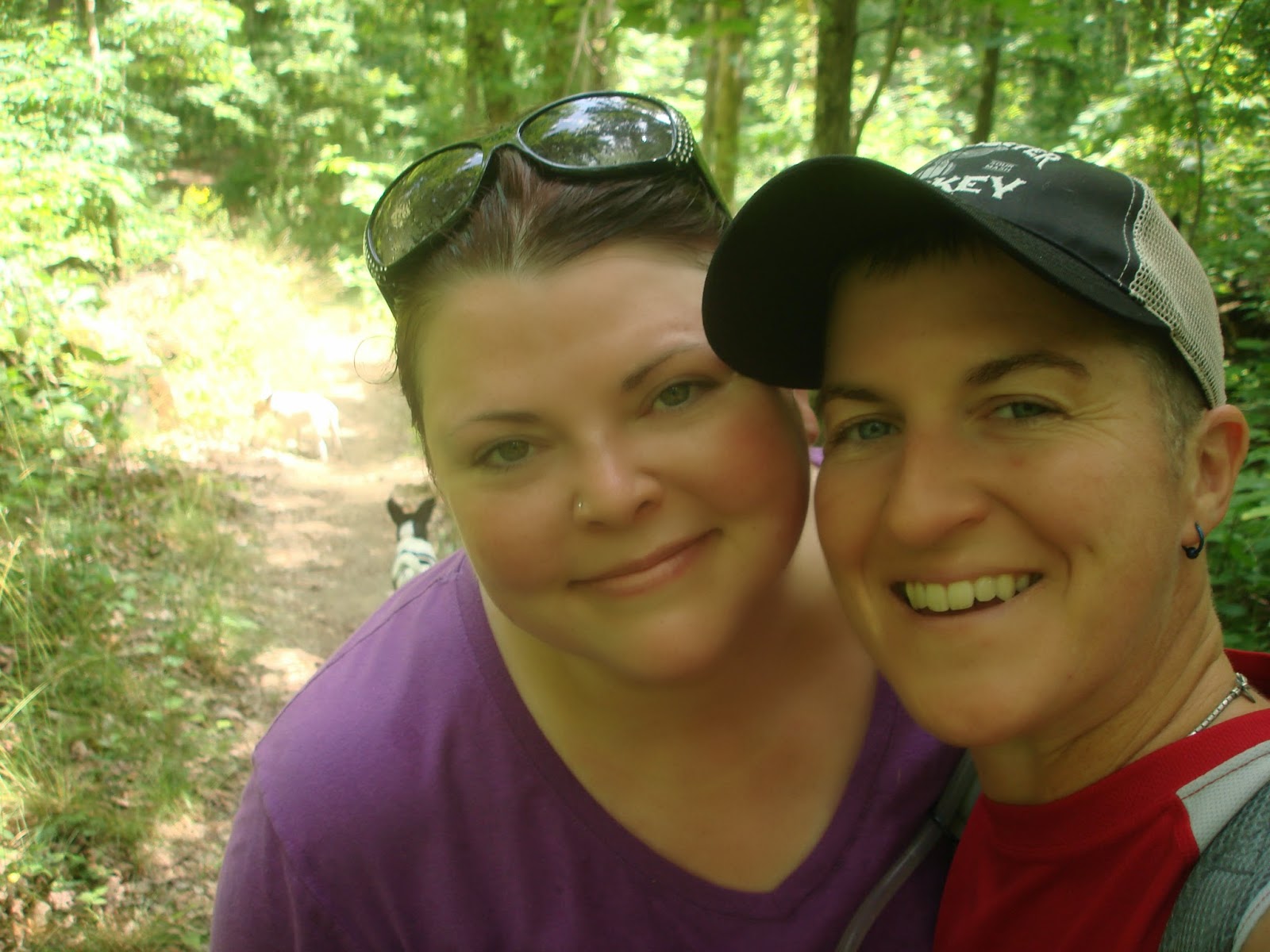 This photo above I thought was one of the best of the day. Hard to tell, but both dogs are in the background. And can you tell that this was toward the end of the hike?...no more nervous. 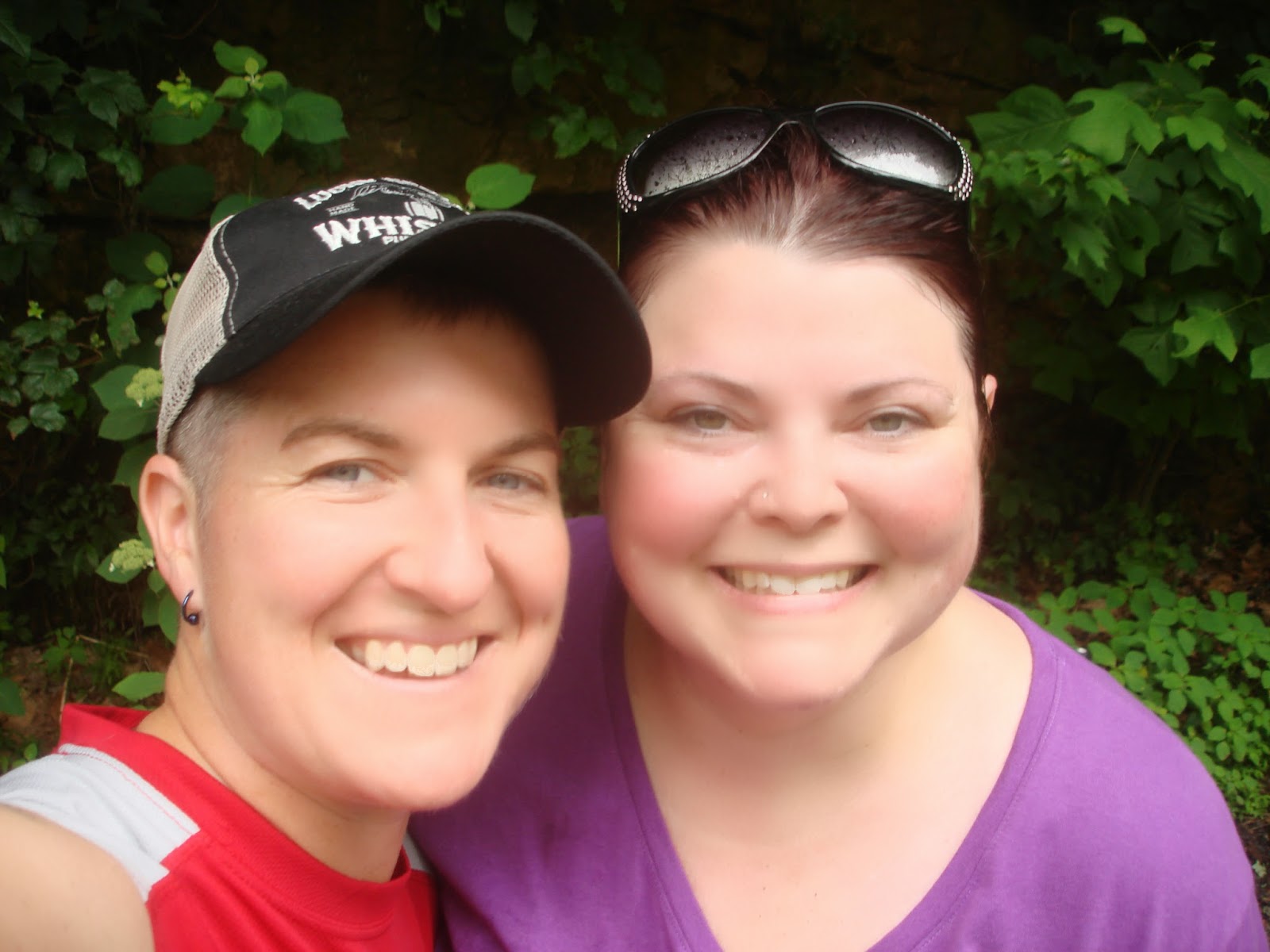 We did it! Hiked just short of 3 miles to the bridge and back. Success!!! We checked this hike off our vacation bucket list and returned to our cabin for some chill time on the porch.

Much more to come...stay tuned.

Posted by Rachel Dickson at 1:57 PM