Who knew you can tap Box Elder trees? 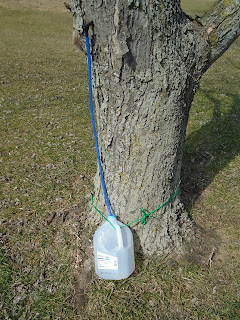 Turns out...it's true!  Box Elder trees are from the maple tree family...also sometimes referred to as a Manitoba Maple.  And dontcha know...nearly ALL the trees in our backyard are....drum roll please....Box Elder trees.  (funny little side note here...we've put up with tens of thousands of pesky box elder bugs each summer which are inherently drawn to Box Elder trees...and NOW I finally discover the hidden value in these trees. YEAH!)

After researching how to go about tapping our trees, learning what supplies were needed for each step of the process and how to go about boiling down the sap and all involved in the finishing process...I jumped right in!

Sap Collecting
I purchased taps and tubing from Amazon.com.  I found food grade buckets and a 5/16" drill bit at Lowes.  I also used gallon jugs that were once spring water containers.  The weather was perfect (in my rookie opinion) for sap to run and I collected just over 25 gallons of sap.


Evaporation Process
There are numerous ways to go about boiling down the sap...but I wanted to go about this using a wood-burning process outdoors.  From what I've read it takes something like 45 gallons of sap to make 1 gallon of syrup when using Box Elder sap.  (also note that Box Elder sap makes a more sorghum-like flavored syrup) 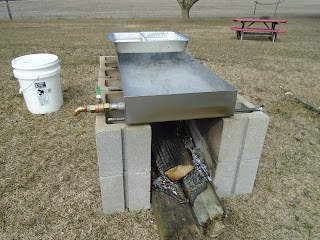 To speed up the evaporation process...the more surface area you have...the faster the water evaporates out of your sap. I figured it would take FOREVER to boil my sap down if I just used a big boiler pot similar to a deep-fryer pot.

I once had visited a friends home in New Hampshire that had Sugar Maple trees...and the time of year I visited just-so-happened to be maple syrup season.  I got to see first hand how they went about boiling down their sap...outside...over a fire...with a huge flat pan (their's probably measured around 48 inches wide by 72 inches long or so).  Where could I get one of these large flat pans that's food grade?

Well, low and behold there's a company in Huntington, Indiana that makes these maple sap pans out of stainless steel.  Perfect!!  I called them up...ordered one and it was here within two days!  The one I picked out of the assortment of sizes they offered measured 16"x40"x4", would work beautifully for what I was planning. 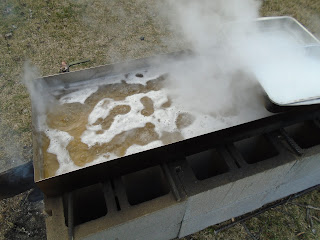 Then I built an outdoor stove of sorts using two rows of concrete blocks with a gap in between wide enough to set my new pan onto.  I had watched various videos on youtube about how to go about boiling down gallons and gallons of sap most efficiently...one of which involved a big flat pan and then having two secondary pans in which you pre-heat your sap before it's dripped into your big pan so as not to "kill your boil".

The plan that I hatched from all my research worked beautifully.  It took me about 8 hours to boil down just over 25 gallons of sap...and as we speak I'm working on the final more controlled boil indoors before I bottle my finished product. 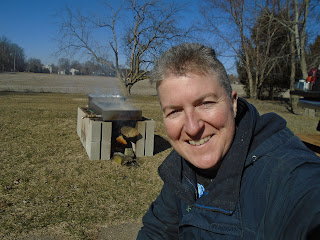