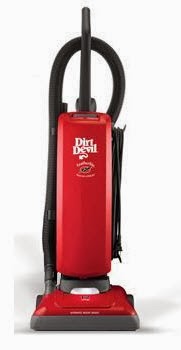 I'll bet you're well aware of the relentless cold and nature's winter warfare that has taken hold of the northeast. (hah, if you're a reader of this blog...pretty obvious if nothing else).  It's in times like these that the littlest of things brings the smallest reliefs and poof one's perspective changes.
Vacuuming had become quite a chore at our house simply due to the fact that every time I pulled out the vacuum and plugged it in...usually within the first 5 minutes (or less) the damn thing would fail. I was always having take apart the aparatus that involved the beater bar and fiddle with something to do with the belt...that is until the other day. I'd had enough of the nonsense of this. (Also am confident that Chris tired of hearing me grump and moan and cuss and fuss over the process vacuuming previous caused).
Being hard-headed...with the mindset of "surely this is a simple thing and can be fixed" had begun to grow old. After all the definition of insanity is said to be "doing the same thing over and over expecting different results". Even I have my "this is just stupid" breaking point.  So thanks to the internet and UPS...we are now the happy owners of a forty dollar dirt devil and O M G, why the HECK didn't we do this sooner?
Dealing with the constant strain of being held captive inside by this relentless winter...and trying to do simple things indoors like keeping the house clean became an additional strain because simple little appliances like a vaccum we previously used added to this...naturally having one that actually worked like it was supposed too? A dream!!!
So I say here to all the world...thank you Dirt Devil! Thank you for being a little flicker of light and hope. And even as I write this I know it to be ever so dramatic over a vacuum cleaner. But at the same time is worthy of a blog post because on a day that just wouldn't stop with frustration...the new vacuum arrived. I put it together, plugged it in and POOF. Attitude adjustment activate. It brought a smile to my face. Everything from that point forward on that day seemed much improved. And to know that when it's time to get out this little gem and vacuum again...it will work. Like it's supposed to. Is oh so lightweight and holy crap the sucking power of this thing. I am impressed!
And as ridiculous as it sounds...I can hardly wait to vacuum again. Much mucho easier than shoveling snow, although won't help my cause in winning at arm wrestling as it provides no workout like shoveling.
It truly is the little things. The small stuff...can in fact make us crazy...unless of course we declare enough is enough and look to go more with the flow.
I know one thing...carpet dirt is toast in our house. Thanks again Dirt Devil. You made my day!
Posted by Rachel Dickson at 9:37 PM