Chickens are the damndest things! 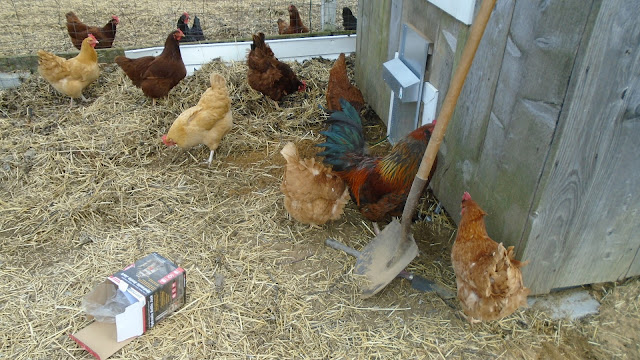 So here's the thing about chickens...or shall I say...ONE of the MANY things about chickens.  They are some of THE most curious beasts known to man!!

I have to laugh...because ANY time I get involved in some sort of project in the chicken yard...here they all come to see what's new.  Gotta be all up in my business.  It makes me laugh every time and yesterday was no exception!

I've talked here in my blog about the previous mouse problem I had in the chicken barns....just so happens one of the results from this was a settling of the little chicken coop.  The ground underneath had been tunneled in such a way that the whole coop was leaning to one side.

I hatched a plan to dig up underneath one side and use a jack to lift it back up and then put concrete supports under it to keep this from happening again in the future.  Which after a little bit of a struggle and the usual tool failure and creative problem solving as these sort of projects go...you can see from the above photo that ALL the "kings horses and ALL the kings men" had to come see what was going on.  (ie...all the chickens had to investigate as to if this was something they could benefit from)

It made me laugh when I realized that they were getting in the way of my project.  The rooster is standing in front of the hole with my jack down in it, so you can't really see that well in this photo...but you get the idea of how invasive they can be.

I just had to stop and take a picture of this.  Yes...a picture is worth a thousand words!

Just another reason why it's fun to have chickens around.  Never know what they're gonna get into.