The finishing of my Box Elder tree sap (25 plus gallons) boiling process took about 4 hours indoors (after the already invested 8 hours plus of boiling outdoors). The cook pot below was nearly full when I started...it evaporated down to about 1/3 of what I'd brought indoors.  In retrospect, I probably should have let my sap boil down a bit more when I still had my fire pit going outside...but I was concerned that I would scald my boiled down sap...or worse...burn it.  Since this was the first time I've done this...I opted to err on the side of caution to increase my odds for success. 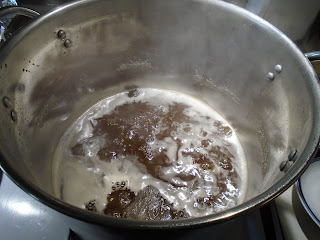 I hadn't ever done any canning projects on my own even though I spent endless hours during the summer of my growing up years helping and watching my mom can everything from tomato juice to green beans.  Even though I helped with the prep and watched this go down summer after summer...I couldn't have told you how to sterilize a mason jar or how to prep the jar rings or canning lids to be sure they seal properly for optimal shelf life.

Thanks to Youtube and various sites I found online...turns out you can sterilize mason jars in the microwave. YEAH!  And then enhance the process by setting your jars upside down on a cookie sheet in a 280 degree oven until your ready to pour in your syrup.  I didn't find any information that was convincing enough to me that it was necessary to boil the lids...so I just washed them in a hot water bath (the rings too) prior to drying them off and putting them on the jars. 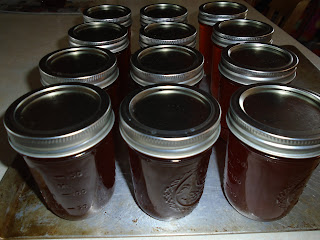 When my sap reached 219 degrees (thank you candy thermometer) I turned off the heat and poured it through a strainer and then began putting it into the 1/2 pint mason jars I'd prepped.  Filled them each to the bottom ring at the top of the jar, popped on a lid, screwed on a ring and voila...waited for that popping sound when your lids seal properly after all the science of the vacuum action caused by the shrinking of air space from the syrup cooling in the jar...etc occurs.

I do remember mom's anticipation of all her jars sealing from her big canning projects...and I had the same sort of nervous anticipation.  After all this work, who wants the last part to fail?  Of the 12 jars of syrup I had...8 of them sealed.  No idea really why 4 of them didn't seal...but...I'll guess that answer will come before next year when I try all this again!

Success!!  And now I know how to make maple syrup.