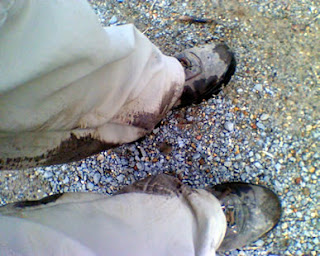 First off, I can't believe it's February already! How exactly did THAT happen?

Secondly, I started the new month off with another trail hike. This time (since I knew it would be muddy...and mountain biking would be a bad idea) I decided to hike the mountain bike trail at Booker T Washington State Park.
Note here that this was only 2 days after the big snow, rain, sleet mess hit this region...so cabin fever was a factor.

I'd heard that this was a 5-miler and having no map or any idea where this trail began I stopped by the ranger station on my way into the park for some info. I'll simply sum up that info-gathering-exercise as "frustrating" although I did get directions to where this trail began. (no maps available at the ranger station, which I thought a bit odd, but there is a map posted at the beginning of this trail which I learned later I should have studied a bit more intently.)

Fyi, this trail at Booker T Washington State Park begins in the parking area below Picnic Area 1. Just follow the signs to "mountain bike trail" and Picnic Area 1 from the entrance of the park...and poof...trail head. Also note here that this trail is listed on their website as 6 miles. I'd say it was every bit of that.

So I set off, having studied the first half or so of the trail map since I only really intended to hike about an hour or so in a "there and back" sort of manner. But as I trudged along...I decided, heck, I'll just hike the whole thing.

Beautiful views, scenic bluffs, lots of singing birds and terrain changes. Will definitely be fun to mountain bike this trail...but I'm gonna wait for it to dry out a bit for that. 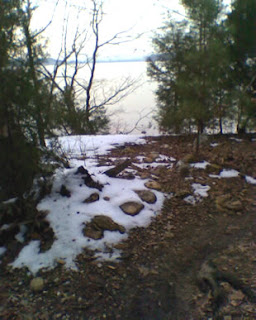 Anyway, yeah for "inner compass" that I inherited from the Dickson gene-pool...because about 3/4s of the way thru this hike, the trail isn't marked all that well, and there's quite a few trail crossings and forked turns and the main trail isn't marked at all...but it does run along a road at this point and from my memory of glancing at this part of the trail map...so after tuning into my inner compass, continued on in the direction I sensed was the way back. Turns out, I was right...which was a very good thing because after trudging around for over and hr and a half...my legs were starting to ache. I picked up the pace and trudged on arriving back at the parking area about 45 minutes later.

So after just over 2 hrs of hiking, snapping a photo of my mud-striped pant legs I hopped into my vehicle elated that I didn't bike this trail today. But nonetheless, an enjoyable experience. I LOVE trails like this that run along water. Booker T Washington State Parks borders Harrison Bay, so you can imagine the views!
Posted by Rachel Dickson at 8:43 AM